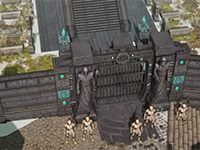 A new developer diary for Pathfinder: Wrath Of The Righteous offers a look at how Drezen is built and preps us for this Pathfinder to hit the consoles

It looks as if our assumptions were correct and we will be seeing Pathfinder: Wrath Of The Righteous hitting the PS4, PS5, Xbox One, and Xbox Series X at some point after it launches on the PC. It is still poised for its initial release date for September 2nd of this year, so expect Owlcat Games to have it ready to hit the consoles sometime after that. It could be quite a while after or it could be a few months. There is no timeline set for that, but we might be able to look at the previous Pathfinder release to get a bit of an idea. If the development of this one has not shifted too much from the past. Something that sounds like it could be the case with the latest development diary that is out there along with this little announcement for the platforms out there.

This new video for Pathfinder: Wrath Of The Righteous, focuses a bit more on how the level and game design has shifted a bit to allow players a bit more freedom with it all. This one does change up some of the kingdom mechanics as well as how we can view the game. The camera is free to move around and not stationary as we saw last time. Something that is nice for players, but makes things harder for the level designers and artists who need to worry about all of the issues that arise with that. Verticality is a thing and seeing the recreation of Drezen here for Pathfinder makes it so that things have to flow a bit smoother between transitions and how the player can look around the maps.

New features that will help pan the camera up and around have been added into this version of the Pathfinder to give us that smoothness we crave. Especially when you see how we can evolve the kingdom over time with our choices and if we opt to dive into the Kingmaker systems that are being carried over. Being able to build massive forests or a massive ziggurat depending on our Mythic path can easily make this can of mechanic overly necessary when trying to flesh out our own little world in this one set in the Pathfinder universe. Even if this is all based on a tabletop adventure path we can all currently enjoy if we do not want to wait for the game's full release in a few months.

Pathfinder: Wrath Of The Righteous — The Biggest Fantasy Fortress We've Ever Built

In this part of the Owlcat Games’ Pathfinder: Wrath Of The Righteous Developer diaries, we are going to tell you about one of the greatest, most complex, and interesting locations we've been working on so far — the fortress of Drezen.

Are you excited to see this Pathfinder title also make its way to the consoles or did you fear it would be a PC-only release this time? Do you like having the freedom of camera movement here or do you prefer to have the set angles that you had to work with? Have you figured out which Mythic path you might be going down or will you be holding off until you can experience the game in its full way this September? Let us and the worlds out there know what you are thinking about down in the comments and then feel free to discuss it all. If there is more for Pathfinder: Wrath Of The Righteous, know that we will see it all here on the site. All you have to do is keep checking back for that and everything else that we might have to offer up.