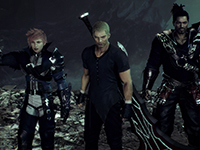 I hope you are ready for some new kind of chaos in your life, as that is what Stranger Of Paradise: Final Fantasy Origin seems to be bringing into it all for us. This would be one of the unnamed titles that Square Enix had to show off during E3 this year and it was definitely one of the more questionable ones. It also happens to be one of those titles that were rumored out there with it being a Soulslike title inspired by Final Fantasy and not any kind of sequel or spin-off that the name might suggest. Given that the trailer here is all about our team of three heading out to kill of chaos and end some nonsense, it has made more of it out there than could have been expected. Hopefully this all goes away when it launches in 2022 for the PS4, PS5, Xbox One, Xbox Series X, and PC.

To be a bit clearer, as the trailer and name are not, this is a new Soulslike game that only draws from the first Final Fantasy and could be telling a different and more meta-story along the way. Hence why there is the Chaos Temple and Warriors of Light bit in here. None of whom look like they fit the bill here in the trailer, but the gameplay does look a lot like we have come to expect from the game genre. It looks like it will sprawl over that original world and will have elements mixed in along the way, but it will be its own telling of the story and not some form of a remake. It is not your normal Final Fantasy as the tag here says. Thankfully, if you are still overly confused from the chaos all of this has sparked, you can play a bit of a demo for the game on the PS5 right now and until June 28th. That too has had a bit of a rocky release but it does offer up a bit of a better idea as to what Stranger Of Paradise is going to be about.

With the memory of their struggle buried deep in their hearts…

Jack and his allies, Ash and Jed, burn with resolve to defeat Chaos as they throw open the gates to the Chaos Shrine. Yet doubts remain—are they truly the Warriors of Light the prophecy foretold?

Step into a world of dark fantasy and revel in the exhilarating, action-packed battles!

Were you hoping to see a full remake of the original Final Fantasy here or did you expect it to be the Soulslike title that was rumored out there? Will you be giving this demo a try or will you just be skipping it until there is something a little more solid for all of this? Did we all really want a Soulslike version of this game out there or will this be the title that redefines some of the IP out there still? Give us all of that feedback down in the comments and then feel free to discuss it all. If there is more to share for Stranger Of Paradise: Final Fantasy Origin, and we know there will be, it will be on the site for you here. Just be sure to keep checking back for it all and everything else we can bring you out of E3.