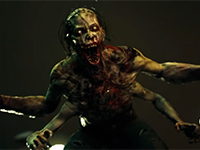 Given the team working on Back 4 Blood, it was easy to assume that we could be seeing some form of PvP in the mix at some point. When it came to other titles from Turtle Rock, it took a bit and came post-launch. It looks like we are not going to have to wait further than October 12th for that to hit Back 4 Blood, though, as it was announced during E3 that we will be seeing a PvP mode in the mix of it all then. That would be the launch date for the game on the PS4, PS5, Xbox One, Xbox Series X, and PC. This just adds a whole new aspect to the game that many might not have suspected here. Just get ready to figure out which of the Ridden you will be going in for it all.

You can see a bit of the new gameplay for this mode in Back 4 Blood just below, but know that there is little context to it all. Well, besides getting the chance to play as your favorite creature on a different team sent out to take down the Cleaners in the match. Those that remember the L4D Versus mode will have a better understanding of things, but this will also mix in the Back 4 Blood card system. A system that will stay the same and not give any side an advantage in future matches. Something that the card system does not do in the traditional single-player or co-op version of the game. This will help keep everyone on the same footing and rely more on player skill, but could lead to some very rote feeling matches beyond all of that.

The new PVP mode for Back 4 Blood tells us one thing — things are about to get messy. Coming Slay, October 12!

Are you excited to see that Back 4 Blood will be going down the same PvP road that the studio has gone in the past or do you think this is a title that did not need it yet? Do you think that we will see things change for the card system to help keep things flowing or will this be the only way to keep even footing for all in the future? How else do you think that we will see this mode balanced along the way given the extra power some of the Ridden have without a human behind the controls? Give us all of that feedback down in the comments and then feel free to discuss it all if you so wish to. More for Back 4 Blood will be out there, and we will be here to share it. Also, we have more for E3 to get out there, so be sure to stick close to the site for all of that and more.