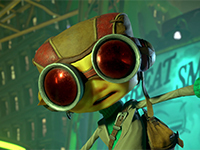 After quite a bit of waiting, we now have a release date for Psychonauts 2 for the Xbox One, Xbox Series X, and PC gamers out there. Those PS4 gamers are going to have to keep waiting, as this was the only thing announced during this year's E3 when Double Fine took the spotlight for a bit to give us what we all are looking for at this point. None of this is a huge surprise after the buyout that happened shortly after Psychonauts 2 became a successful project backed over on FIG. It is just a bit of a letdown that we will have to see it go the timed exclusive route for now. At the very least, it will be hitting Game Pass on day one too so there is that for those that subscribe to all of that. Now we just have to wait for August 25th for this to all happen.

In addition to that announcement, we also were given a bit of some new gameplay to take in for Psychonauts 2. It is quite a bit of cuts between the platforming, exploration, and over-the-top characters we will get to enjoy along the way. Not too much different than what we had at E3 the last time we saw it all, but it is still something new to go along with the release date announcement. Also, it is a nice little salve for those feeling a bit more of a burn to find out that Psychonauts 2 will not be getting a bump to the PS5 at any point. That could change along the way, but I would not place any money on it given that they are still only going through with the PS4 version due to the obligations of the original financiers of the title. We can still try to hold out some hope.

Psychonauts 2 is available on August 25. Play it day one with Xbox Game Pass.

Combining quirky missions and mysterious conspiracies, Psychonauts 2 is a platform-adventure game with cinematic style and tons of customizable psychic powers. Psychonauts 2 serves up danger, excitement, and laughs in equal measure as players guide Raz on a journey through the minds of friends and foes on a quest to defeat a murderous psychic villain.

Has it been too long of a wait for Psychonauts 2 or do you think it will be fully worth it all given the pedigree of the developers here? Were you holding out hope that we would see it hit all of the next-gen platforms or was this expected after Microsoft purchased the studio? Do you think we will see some bigger collections for this title or will we be seeing only the basic game here and out to launch? Give us all of that feedback and more down in the comments and then feel free to discuss it all. If we have more to share for Psychonauts 2, we will share it all here. Just be sure to keep checking back in for all of that and everything else that we might have along the way. There is still so much more to drop on you all, so keep a close eye on the site for it all.