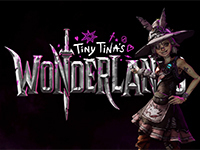 One of the big splashes out of the Summer Game Fest is here with Tiny Tina’s Wonderlands getting the full announcement for a 2022 release. This will be the next big title from Gearbox and 2K to take us on a different kind of adventure out there. Not just a spin-off from the Borderlands or an expansion, but its own title out there that has been in the works for a while. Something that seemed to be spawned out of the Tiny Tina’s Assault On Dragons Keep, it looks like Wonderlands will take us down that fun new kind of experience. With a stellar cast out there to voice it all and bring it all to life. Also, with some of the familiars coming back to reprise their roles in the universe to keep us all engaged just a bit more and add more humor to it all.

Details for Tiny Tina’s Wonderlands are still a bit on the early side and we have only a small announcement trailer for the game as of now, but there are a few things to note. This will be a new adventure where we will have the ability to build and customize our own characters while using some of the same gameplay we have seen in the Borderlands titles. That would be the well and gunplay aspect of it all as we head out and try to bring down all of the mythical beasts in the world. All of which is dictated and altered by Tiny Tina as she deems fit while taking us through a D&D-style game. That is also the feeling we get during the closing screen for the announcement of Wonderlands that you can now take in just a bit lower down. Have a look and get ready to wait for more.

Embark on an epic adventure full of whimsy, wonder, and high-powered weaponry! Bullets, magic, and broadswords collide across this chaotic fantasy world brought to life by the unpredictable Tiny Tina.

Roll your own multiclass hero and loot, shoot, slash, and cast your way through outlandish monsters and loot-filled dungeons on a quest to stop the tyrannical Dragon Lord. Everyone's welcome, so join the party, throw on your adventuring boots, and be Chaotic Great!

Tiny Tina’s Wonderlands is coming in early 2022 for the PS4, PS5, Xbox One, Xbox Series X, and PC via Epic Game Store.

Did you suspect that we could have been getting a title like Wonderlands here or is this a massive announcement for fans of it all? Do you think it will play a lot more like the expansion Tina had before or will it deviate into its own massive thing and spawn even more along the way? Do you think this could be a similar RPG to others out there that use humor and fun narration to alter the gameplay as we play? Let us all know down in the comments and then feel free to discuss it all if you so wish to do so. We will keep the news and updates flowing for Tiny Tina’s Wonderlands and everything else we get out of the Fest here. Just be sure to keep checking back in for all of that and everything else we might have along the way.