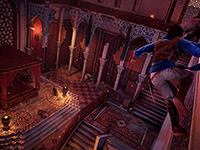 The wait continues forth for the Prince Of Persia: The Sands Of Time Remake that many have been hoping for on the PS4, PS5, Xbox One, Xbox Series X, and PC. It was delayed not too long ago and many were hoping that Ubisoft would have some kind of an update during this year's virtual E3. They do, but it is not one that I am sure many will be looking to have. It is more along the lines of needing to wait until next year (2022) to get your hand on this remake for Prince Of Persia. Still within the scope of their original announcement but definitely near the tail end of it all. Most likely between January and March of next year at that. If there is not something that pushes it even further along than we could all foresee out there.

All of this comes from an update that the team placed out there on their Twitter account in regards to the Prince Of Persia remake showing up during the Ubisoft Forward that will be taking place. Sadly, this is also where we have word that there will not be anything about this title in the mix of all of that too. More or less, this was a double whammy for those looking to get back into some Prince Of Persia gameplay this year without the need for loading up older systems. There is always that option when it comes to remakes and remasters. Although, some time the newer version will fix many of the problems the original had. We will just have to wait a bit more now to see if this will be the case here or something that should have just been skipped over for the time being.

A message from the Prince of Persia: The Sands of Time Remake dev team: pic.twitter.com/3B8tgUGkwl

Are you at all surprised that we will have to wait a bit longer for this Prince Of Persia or did you expect it from the last delay we had? Do you think we could see it in the earlier part of 2022 or will that have to move it out of the Q1 state and out of the original timeline we have been given? Do you think this will still fix any issues you had with the previous version of it or will it just be here to bring players back in for a title they could already boot up with an old disk? Give us all of those thoughts down in the comments and then feel free to discuss it all if you so wish. We will keep sharing what we can for the Prince Of Persia: The Sands Of Time Remake remake, so be sure to stay locked in on the site. We hope the next time it will be some form of good news to enjoy.