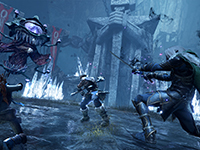 Dive further into the gameplay Dungeons & Dragons: Dark Alliance is going to offer up as we get more of those monsters making up the Dark Alliance too

It is hard to believe that in only a few weeks we will be able to put hands on Dungeons & Dragons: Dark Alliance for the consoles and PC. June 22nd is so close we can see the blood flowing in it all. Then again, there might be some out there that have been behind on how Tuque Games will be handling this Wizards Of The Coast IP in video game format and this is why we need to break things down a bit more. Well, not us specifically, but the latest video we have for Dark Alliance that will take us all through the story, characters, monsters, and gameplay modes we will have to perfect so we can do what has to happen in most Dungeons & Dragons games. Save the world from some kind of horror while trying to fill our pockets with some fat loot along the way. Just like good little adventurers.

Now that we have the basics of the story out of the way, we can take a look at the action aspect that Dark Alliance will be handing us. All through four specific characters and a progression system that looks and feels a little more standard than we could have expected in a game in the Dungeons & Dragons line. Each character will have at least fifty different attacks and somehow this will be made easy to handle for the less experienced player out there. All while we take on the thirty different enemy types out there that can range from small to huge. I am guessing those are less of descriptors and more of the tabletop versions of it all. We also have a bit on how the scaling for the solo and co-op play will work in Dark Alliance, which also sounds about the same as we would expect at a table. Just with more button mashing between the classic stereotyped character we will have in the mix. Have a look for a bit more of the detail on all of that but it is about summed up here.

Your Party. Their Funeral.

The team behind Dungeons & Dragons: Dark Alliance give you an overview of its gameplay mechanics, narrated by Jemaine Clement.

Battle legendary monsters with your friends in an explosive action brawler set in the world of Dungeons & Dragons.

Do you think that Dark Alliance will offer up that unique gameplay we know from Dungeons & Dragons in general or will it be another action-brawler to add to the mix? Would you have liked to have more characters to choose from or will that be added in later for a small fee? Do you think we will ever come close to having a D&D video game that is like a tabletop version or is that just an insane hope? Give us all of that feedback down in the comments and then feel free to discuss it all if you so wish to do so. If we have more to offer up for Dungeons & Dragons: Dark Alliance, we will share it all here. Just be sure to keep checking back in for all of that and everything else we will have over the coming weeks.