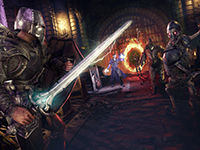 New updates for Dying Light: Hellraid are out there with it bringing a new Story Mode for us to enjoy in Hellraid with other little bonuses

We finally had our big update for Dying Light 2 hit us and now we are back just before the big week with a new update for the Hellraid DLC as it adds quite a bit of new content for Dying Light as it stands right now. It looks as if Techland has been insanely busy here with all of these titles and those on the PS4, Xbox One, and PC will be able to reap all of the rewards for now. As long as you were looking for a big story in your Hellraid experience here. That is the new mode that you can add into the DLC of the game to expand the lore just a bit more. Not that it seems like it will have a massive impact on things in general. That or maybe this will all be some extra tidbits for us to know when Dying Light 2 launches later this year. That would be the better way to handle these things here and keep us all further engaged for the next set of months after all.

This new mode for Dying Light: Hellraid will take us all deeper into the bowls of the Ba'al Temple as we try to rescue a new and mysterious mage named Lucius. With three new quests to complete and rewards to collect in the normal Dying Light manner of it all. All while enjoying some of the new tweaks to the game and the new lighting effects that will have us engaging just a bit more in the world built here for Hellraid too. All while going at it all solo or in the co-op mode that many fans have been enjoying all of this with again. Thankfully, this is something that will be adding to the Raid mode after playing through and completing it. Not that there was a concern of anything getting removed from the game due to all of this here. Maybe some of you had those thoughts?

Did you expect us to see a Story Mode for Dying Light: Hellraid here or did you think it was only going to be minor updates until the next big title launched? Do you think it will link into Dying Light 2 at all or will it stay all in this form and nothing more? Will you be playing it in co-op or going at it solo again as the game generally has been over the years? Let us all know down in the comments and then feel free to discuss it all if you so wish to. We will keep updating everyone with more for Dying Light and Hellraid if there is more to share. Just be sure to keep checking back in for all of that and everything else that might be out there.