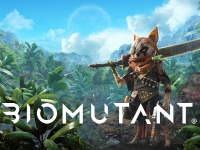 We sit down and review Biomutant. A new post-apocalypse action-RPG with little furry Kung Fu creatures. Here is our review of Biomutant

It has been a good clip since we had a new action-RPG IP come out there and this is why I had my eyes on Biomutant. This is the latest from Experiment 101 and THQ Nordic that had a bit of a rough cycle to get out there but is finally on the PS4, PS5, Xbox One, Xbox Series X, and PC for us to enjoy. Even if it is still waiting for the next-gen push so the game will run natively. No matter the case, Biomutant is out there, we have had a chance to play through it, and now it is time for our review on how the game is. If it is worth your time, its pitfalls, its achievements, and if those little furry beings out there will have us slogging through another post-apocalypse to save the world from something worse. Sit back and get ready to dive into it all now.

The world as we know it is over and gone. It has been left in shambles by many different things out there and the only thing left of any sentience are what we play as in Biomutant. We are the protagonist as we head out into a world we have forgotten, as well as time. Things have shifted and changed with the Tree Of Life trying to reclaim it all and warring factions of survivors out there are fighting over what to do with it all. As a lone ronin, we need to embark on a quest to reclaim our lost memories as well as unite the clans of the world to try to rebuild. That or let the horrible beasts bring down the Tree Of Life and watch it all crumble. It is up to us and our choices seem to be all that matters in this world. There is a whole lot to unpack here in Biomutant and most of this seems to come from having too many things going on when it comes to the gameplay. This would normally sound like a great thing to have in a game, but here it feels like Experiment 101 had a whole lot of great ideas but no real way to make them all tie together. Things like the combat styles in Biomutant feel like the bigger things to point out, as it is not something that can be ignored or skipped in the game. Not only are there different variants we can use along the way, but there are combos that each offer up, and then the need to use all of them to use some of the more special versions of it all. If it sounds confusing here, that is how it handles. Yes, there are options to dual-wield, go Gun Fu, or even just fight unarmed but unless you plan on going in with only that in mind, you will get lost very quickly and then feel like you are missing large chunks of the game. There is no easy way to swap between them and this is something needed to unlock Super Wong Fu moves in the game. In fact, I found it easier to just sit back and shoot enemies from afar than to try to figure out how any of the other things worked. Too many options can be overwhelming and cause players to ignore chunks of a game is all.

To make things slightly worse, this also feels like it came over in the gear, weapons, and crafting systems as well. There are a few bonuses to being able to mix this all up in Biomutant, besides appearance, but with each slot of the costume has its own customization and then those having even more for each item, it is easy to get bogged down and just ignore it altogether. In fact, I tried for quite a while at the start of Biomutant but quickly saw little advantage to it as I could find better gear in the mix of the world that negated the ten minutes of piecing things together. Did it look cool and customized? Only a little bit, but when looking for the best stats to help win the fights out there, I would just rather place fully built stuff that came with their own bonuses I could not get any other way. It was a great mechanic and thought to have in there, but it felt like there was too much to worry about, and lost focus as I just wanted to get back to the game and try to wrap up the various stories I was going down here.

This brings me to my last and big issue I had with Biomutant. This revolves around the story and missions we needed to head out and complete to gain XP, get more gear, and add more mutations and powers to our character. It was nothing more than the usual lone hero saves the world kind of affair, but all of it was told from the perspective of someone else. Every bit of dialog was spoken in an in-world language and then interpreted by an unseen narrator. That or our little automaton that follows us around. It was insanely unclear. This also bled into the story as it always felt unclear as to what was going on or just plain annoying to have someone else tell us how others were feeling along the way. Sure, it did mean that we only had to have one voice actor to do it all, but as a storytelling device, it missed the mark for Biomutant. I almost always skipped it and just opted to read the clues in the journal or follow the markers on the map instead. I know I missed out on things that could have been amazing for this IP, but at some point, it just starts to grate and enough is enough. I think the reason I hated the above issue so much in Biomutant has to come down to the fact that the world was filled with so much wonder and interesting things for a post-apocalypse style of game. There was so much going on that I wanted to know more and see more. All of which the art team and level designs seemed to nail on the head. I loved exploring the world and finding all of the little visual clues as to what happened in the game's world to lead us to where we are. Almost like everything had some level of purpose to still be around and useful. Even though the audible version of the story was rough to get through, I could find out enough as to what was going on in Biomutant's world. Even with the stylization to it all, it felt like something that could have existed and see how the horrors of the current one could lead here. It is a storytelling method that worked vastly better than the narration and well worth the time to just play in silence based on all of this.

To that end, while the crafting system may have been implemented in a way that can have some moving away from it in Biomutant, there is a lot to enjoy and experience in the mix of it all too. Sure, those that like to dive in and spend all of the time doing so will easily get lost in it, but for the more casual of gamers in this aspect, there is more to see when it comes to it all. Again, this is more of a world-building aspect over a gameplay aspect but like very few titles out there, Biomutant made great use of what could still be around in a world they have built and it was fun to see it come to life. Some of it was a bit more tribal in general, but when you get to see how the "relics of the past" can be reused to better defend from the monsters of the day, it is always fun to see and thus explore for more to play with. It is not the main focus of the game, sure, but it was a massive highlight I had and brought me quite a bit of enjoyment while walking through destroyed buildings or the settlements of others out there. Just to see more of the creativity out there.

Lastly, while I was not a huge fan of the base combat in Biomutant, when it came to the big bosses of the game, I found that there was a lot more focus on them and this made the fights a bit more memorable. These would be the World Eaters for those looking to play along and each felt like massive events that we barely survived along the way. All in the best of ways that made it feel like an accomplishment no matter the case. Even when one of the transitions from spitting lightning, to basic ground attacks, to force us to fight our way out of their stomach, it was engaging and had me looking for the next one out there. This is where it felt like the combat truly shined and gave Biomutant more of a feeling closer to those titles that are only boss fights along the way of it all. They felt inspired and had to be one of the biggest highlights of my time while playing through it all. Biomutant is not a perfect game, but has a lot of things in there that can capture us to want to keep playing it. This was a game that felt like it had too many ideas to present in perfect ways, but when it did, they truly shined and had me engaged with it all. The story was definitely hard to follow with the narration style but the world-building always seemed to make that a moot point when just moving to the next objective along the way. Biomutant plays and flows like most of the action-RPGs out there but with a wonderful new twist to how the world looks and feels. There are going to be some that love this style of it all and others that get lost in it. Just be sure to know your gaming style when it comes to this one as it might leave you wanting for more in both ways that can be taken here. I am still not upset with the time I put in, I was just expecting something a bit more concise at the end of the day.

Biomutant was developed by Experiment 101 and published by THQ Nordic for the PS4, PS5, Xbox One, Xbox Series X, and PC on May 25th, 2021. A PS4 copy of the game was provided by the publisher for reviewing purposes.