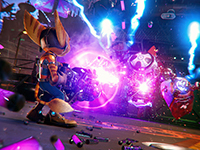 Next week, we are going to get to see the full version of Ratchet & Clank: Rift Apart out there on the PS5 and I know the hype is off the charts for the game over here. We have been keeping an eye on everything that Insomniac Games has been placing out there and have been for a year. Which is what brings us back here today. Partially to have a little more fun for Ratchet & Clank during the waiting period here but also to speculate on something that could be coming to the new game. While this could be just some fun marketing for the IP, we have a feeling there might be something else going on with it all for us. At least something we might just be hoping to be true at the very least, though.

You do not have to be a massive fan to know that Ratchet & Clank have been around for close to twenty years now. They have been on every PlayStation since the PS2 and I have a feeling it will carry on. This is what the following trailer is highlighting with a little bit of gameplay mixed in for Rift Apart too. What if this is all a tease for some of the other dimensions we will be exploring in this title here, though? We have seen fairly little of these other worlds since we first caught wind of the game and that would seem like a highlight to have. What if part of the story will have us going back to all of the other eras of Ratchet & Clank and the game shifts the visuals over to fit the time it is in? That could be a bit out there to speculate on but it is a bit suspicious that we would get a trailer like this a week before launch when most of us know where it all started and how it has progressed. It could all just be some clever marketing to get us talking about the game and ready for June 11th to finally land. I guess we will see soon.

The Ratchet & Clank franchise has been a showpiece of tech, visuals and gameplay across four generations of PlayStation consoles. In celebration of the launch of Ratchet & Clank: Rift Apart, let's take a look at the franchise's evolution since it debuted on PlayStation 2 console in 2002.

Do you think that there is any hope to see all of these other Ratchet & Clank titles show up in this one or is that a far-fetched idea to have? Could that be a fun way to re-explore the history of the two characters for those that have not been playing them since 2002? Is this all just a bit of marketing to get us all talking in this way just a week before the launch and with pre-orders still out there? Give us all of that feedback down in the comments and then feel free to discuss it all if you so wish to. We will keep an eye on Ratchet & Clank: Rift Apart here and update as we get more. Just be sure to keep checking back in for all of that and everything else that is still yet to come.