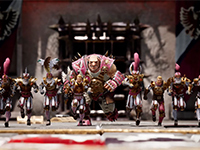 The next team is ready to take the fields and cause all kinds of mayhem for the coming Blood Bowl 3 here. This time it is the Imperial Nobility to take on those Black Orcs and the various other teams we have yet to have confirmed here from Cyanide. Given that there is now a closed beta in the works that we can sign up for, I have a feeling we will see more of these soon too. For now, we have our second confirmed team for Blood Bowl 3 and a nice new video to take us through what they are all about and the various members of the roster of it all. This one is going to be a bit on the rich side, pun intended, so get ready for the glory of the Imperial Nobility to take the spotlight here. It is going to be something that they are good at over time.

Here we go with the team in the Blood Bowl that has all of the money and armor to wear out there in the mix of it all. All to make sure that their Ogres and Bodyguards are able to cause as much damage and clear the field as much as possible. All while taking the hits and shrugging them off as much as possible. All of which is something that the Throwers and Blitzers are going to need to make sure they can make it to the goals. The Throwers doing what you expect them to do with the ability to actually move after a throw too. The Blitzers are able to re-roll failed agility tests and not go down during the downed state of things. If we learn how to use them to the best advantages in Blood Bowl, this could be the team that few will be able to beat. Although, each other team will have similar bonuses and negative to experience for sure.

Not only is Blood Bowl a popular form of entertainment, but it is also extremely lucrative. The rich nobles of the Empire could not pass up such an opportunity to accumulate more wealth and achieve their dreams of fame. Sponsored by patrons with unlimited funds, the Imperial Nobility teams intend to establish their dominance on the field.

They are known for their aggressive defensive and fast counterattacking skills. Their defensive line consists of Linemen, who are extremely difficult to catch, and Bodyguards, who are more than capable of taking their opponents down with them. In attack, the Blitzers and Throwers work together to lead the counterattack. Mainly composed of humans, the Imperial Nobility teams include gentlemen who are not so gentle, supported by Ogres whose power is matched only by their limited intelligence.

With stable lines, skillful passing, and excellent mobility, the Imperial Nobility teams make formidable opponents on the field. Money talks and they have lots of it.

Good news for those who can't wait to try out Blood Bowl 3: registration for the closed beta has started! The closed beta will be happening between the 3rd and the 13th of June 2021.

What are your thoughts on this new team joining in on the Blood Bowl and does it look like it could be your choice from the start? Do you think that they will also start with more recruitment money out the gate or will they just have the look of it all and not any gameplay advantage? Do you think the AI will play correctly in targeting the expensive players all the time or will that just be a specific drawback for the Imperial Nobility only? Let us all know down in the comments what you think about all of this and then feel free to discuss away. We will keep sharing all that we can for Blood Bowl 3 as it comes out there. Please keep checking back in for all of that and much more as we carry on and forward.