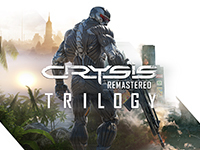 Color me not so surprised here after the release of the Crysis Remastered last year for all of the platforms out there. Here we go with the official announcement from Crytek that we are going to be seeing the second and third titles in the line hit the PS4, PS5, Xbox One, Xbox Series X, Switch, and PC sometime before the end of the year. It was speculated and rumored before with it all, but here we go with the announcement for the Crysis Remastered Trilogy that will bring us the whole package in one little sitting. Now if only we can hope to see it all come at us again with a whole new title in the line after we get these remasters out of the way to help keep the whole thing flowing and expanding the industry more than cashing in on the nostalgia of it all.

For those who have picked up the Crysis Remastered version already, we will get to see the other two titles here get the full 8K upgrade to it all with the same framerates and other visual enhancements along the way. I am also sure we will see all of the gameplay fixes and balances that the last remaster had too with the extra bells and whistles we have for the next-gen consoles too. Also for those that have the Crysis Remastered version already and do not want to have to re-buy it again, there will be an option to get the other two titles by themselves. My guess is that they will be individual titles and not part of a package where you can load up whichever title from the same screen as we have had in other trilogies, but that is also yet to be seen. I guess we will know more this Fall and after watching the latest gameplay clips showing the games off in their new ways.

Crytek has announced the Crysis Remastered Trilogy, coming to consoles and PC this fall. The Crysis Remastered Trilogy features the single-player remasters of Crysis, Crysis 2, and Crysis 3, optimized in partnership with Saber Interactive for modern gaming systems. The three-game bundle will launch on PlayStation 4, Xbox One, Nintendo Switch, and PC (with improved performance on PlayStation 5 and Xbox Series X|S). The remasters of Crysis 2 and Crysis 3 will also be made available individually (Crysis Remastered is already available for these platforms now).

Experience the complete Crysis storyline from the very beginning to the epic finale with this all-in-one bundle perfect for long-time fans and franchise newcomers alike. Battle overwhelming forces across the islands of the Pacific to the heart of New York City in a desperate fight for mankind’s survival. The Crysis Remastered Trilogy includes:

A simple rescue mission turns into an all-out war as alien invaders swarm over a chain of islands in the Pacific. Playing as super-soldier Prophet, Crysis arms you with a powerful Nanosuit equipped with speed, strength, armor, and cloaking abilities. Use a vast arsenal of modular weaponry and adapt your tactics and gear to dominate enemies in an enormous sandbox world.

Aliens have returned to a world ravaged by climate disasters. As the invaders lay waste to New York and begin an assault that threatens the total annihilation of humankind, only you have the technology to lead the fight back. Equipped with the upgraded Nanosuit 2.0, customize your armor and weapons in real-time and unlock powerful abilities in the battle for humanity's survival.

New York City has been transformed into a sprawling urban rainforest sheltered by a giant nanodome. Equipped with the deadly Predator Bow, Prophet must fight through seven distinct districts against human and alien forces, using the Nanosuit's superior technology to deploy brute force or stealth to achieve his goals. There's no wrong way to save the world.

Are you at all surprised that we are seeing the trilogy of Crysis titles here get the remaster treatment now? Was it only a matter of time or do you think that the success of the previous one forced them to push for the same level of detail in these two titles? Could this all be building to a whole new title in the line or will we just see it pumped out one more time in the future when the hardware is superior one more time? Give us all of that feedback down in the comments and then feel free to discuss it all as you so wish to do. If there is more for the Crysis Remastered Trilogy, it will be on the site for you. Just keep coming back for all of that and everything else that we might have to offer along the way.