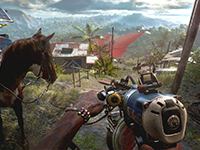 The delay for Far Cry 6 has a light at the end of the tunnel now with the new date getting listed for October 7th now for the PS4, PS5, Xbox One, Xbox Series X, and PC. That is an amazing thing to have lined up now and that is not the only thing that Ubisoft has tossed out there for us after teasing and waiting for a while now. We also have the first bit of gameplay for Far Cry 6 to take in and see how the game might be evolving in this next installment. At least beyond offering up another amazing villain for us to take down as our army of one again. Although, it does look like we might be just an army of one here with all of the extra guerrilla warfare that we will be engaging in here too. That is one of the bigger elements to enjoy in the game this go around here.

We have been introduced to the main antagonist for Far Cry 6 since it was first announced and in all of the media out there before now. Here we go with a look at Dani Rojas, our protagonist, as she tries to exit out of Yars and to a better life. Only to be pulled back in to help lead the revolution and aid the guerrillas out there already trying to bring everything back down from the oppression. It is a similar story we have had but a fully new setting and maybe some extra commentary on the way the world is. All while using the same tactics and maybe some new weapons for a Far Cry title here. We will be building or have built some odd things along the way but it still all feels like another FPS that could have an amazing story. Also, maybe a pet crocodile we can call in while not using our robot puppy?

In Far Cry 6, players are immersed in the adrenaline-filled, chaotic world of a modern-day guerrilla revolution. Welcome to Yara, a tropical paradise frozen in time. As dictator of Yara, Antón Castillo is intent on restoring his nation back to its former glory by any means, with his son, Diego, following in his bloody footsteps. Become a guerrilla fighter and burn their regime to the ground.

Get your first look at Dani Rojas, and learn about the modern guerrillas from Far Cry 6 now! Coming October 7th, 2021.

Far Cry 6 — Rules Of The Guerrilla

Watch the world of Yara come to life now — with the first look at Far Cry 6 gameplay, featuring all-new weapons, gear, and other franchise first elements.

Were you expecting to see something new in this Far Cry besides the story or do you think it is just how the gameplay is being displayed for now? Do you think we will have to keep using the same CDs in the CD launcher we have here or will it always be the same song over and over? Would you like to see the formula changed for this IP or do you think it all works and only be used to tell some engaging stories instead? Give us all of that feedback down in the comments and then feel free to discuss it all if you so wish to. We will keep sharing all that we can for Far Cry 6, so be sure to keep checking back in here. It could be another explosive time to have and it will keep us all going in our fast titles even more.