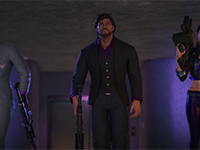 The Saints Row: The Third Remastered is out there on the PS5 and Xbox Series X to bring us all more of the Saints Row goodness

The Saints are back and officially on the PS5 and Xbox Series X with the launch of Saints Row: The Third Remastered here. As you are reading this right now, you can head out and pick the game up once more and head back into the insanity that Deep Silver gave us all from years ago. Just in case the backward versions of the other Saints Row titles that are available too. That is not to dissuade you at all from this remaster, but it is something to note so you can dive into all of the craziness and have the full story all in one place. Not that it will make the most logical sense of it all with how over-the-top it all is, but for those completionists out there, it will be something you will want to have.

If you are on the fence about giving this Saints Row Remaster a purchase, we have a new trailer to show off how the game is looking with all the new visuals. They still look a bit dated given how old the game is and where it is getting remastered from, but to get anything better we would need a remake instead. It is still impressive to see how it is going to look and run on the newer consoles here though. Have a look at the launch trailer for Saints Row: The Third Remastered and then get ready to go off the rails in one of the most insane video games I know I have played in quite some time. It is why it was on the list to bring over to the newer systems instead of some of the others the developer has had out there in the past years.

We are excited to announce that Saints Row: The Third Remastered has officially exploded on to Xbox Series X | S and PlayStation 5. Featuring enhanced FPS and display resolution and faster loading times. And what's more, it's free for all current owners of the original remaster.

Saints Row: The Third Remastered includes all DLC, remastered of course, that came with the original release of the game, so players will get the full, enhanced, package for their current generation consoles. Plus for PlayStation players, we have added the signature Saints purple as a DualSense and DualShock 4 Controller glow color, by popular request.

There are no rules - take the Saints to the top and bring the mayhem to Steelport.

Will you be diving into Saints Row again with this remaster or will you be holding off for the next big release to the IP? Did you expect to see more of an upgrade to the game or would you have expected a remake for that? Do you fear that we will be seeing a remake instead of a whole new title here or will this be to try to fund then next in the IP? Let us all know what you are thinking down in the comments and then feel free to discuss it all as you wish. If we have more for Saints Row: The Third Remastered, we will share it all here. Just be sure to keep checking back for all of that and everything else we might have for you.