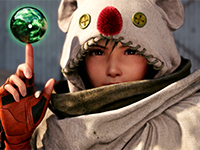 June 10th is so close and those out there waiting for more Final Fantasy VII Remake will be keeping a close eye on that date for the new DLC to drop on the PS5. It is still listed as an expansion and upgrade to the PS5 from the PS4 from Square Enix for those still holding out hope and not having the latest console to play on. That all said, we have a whole lot of new gameplay to look at for Final Fantasy VII Remake Intergrade to get us ready for the drop but also see how things are shifting for not only Yuffie but a few of the gameplay elements that we might not have expected here. More than just a few new minigames in the mix as it looks like some of it is based around combat gameplay and new summons we will have to use when we head back into the world soon.

There is not too much detail in how some of this will work directly in Final Fantasy VII Remake, but a few of the items I was able to catch here are thus. It does look like we will only be controlling Yuffie in these two new chapters for the game but we will be able to issue commands to her compatriots as they join the fights. She will also be able to use her shuriken to smash items in the distance and it will be built into parts of the gameplay along the way to harvest items in the world. I am going to guess that these are going to be more of the basic items in Final Fantasy VII and not the materia she is normally hunting for out there, but that might not always be the case. She is a materia hunter after all and this would be one more easy way for her to do that.

We do get a better look at the Rahmu summon materia in Final Fantasy VII here as Yuffie enters into some combat with basic enemies and bosses. This is where some of the other interesting things to not do come up. First is that Yuffie will be able to perform synergy attacks with her allies that look like they will function like a Limit Break of sorts. Yuffie will also have different styles to take on in the fight that will change the element attached to the shuriken and what damage is used. This is something we usually had to manipulate in Final Fantasy VII Remake by swapping materia on our characters, so it is interesting to see it happen on the fly here. Maybe this will be something the others can learn along the way but it could just be something very specific for Yuffie before she meets with the rest of the heroes in the world. Something, if you pay attention, you might be able to see glimpses of in the background in some of the scenes here.

Do you like the fact that Yuffie will be able to change elements on the fly while the other characters could not and will this be something explained in the story here? Did you catch some of the other Final Fantasy characters moving about in the background of the video here and do you think we will get to see bigger scenes from Yuffie's point of view instead? Were you looking to see more for the Fort Condor minigame here or is it looking like another Tower Defense where we can be the defender or the aggressor depending on the side we choose? Give us all of those thoughts down in the comments and then feel free to discuss it all. If we have more for Final Fantasy VII Remake Intergrade before launch, we will share it all here. Just be sure to keep checking back in for all of that and everything else we have to offer up.