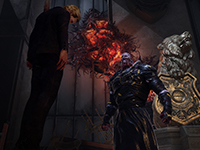 It is all the rage right now and it looks as if Dead By Daylight is going to jump in on it by adding in a bit of the Resident Evil flair into the game on June 15th. This would be the next DLC that will be coming to the game as Behaviour adds in a new killer and two more survivors for us to play around with in the game. If hunting your friends and strangers down with other killers in Dead By Daylight were not enough already. It will never be enough and we will gladly take it all, though, as it looks like we are getting the Nemesis, Leon, and Jill in the game. Respectively from the list of what was coming before, so you do not think you will be going out killing everyone in the match as Jill or something.

When it comes to these new characters for Dead By Daylight, it looks like the Nemesis will be bringing a lot more than we have seen others do in the past. Obviously, there will be the hulking nature of the creature but the tentacles and range it is known for. That and Nemesis will spawn zombies in the match and Nemesis and the spawn will be able to infect survivors with the T-Virus to make it easier to hunt and do more damage to them. There will be random vaccines in the maps to help with all of this in Dead By Daylight too, so we will need to keep an eye out for all of this while also dodging everything that they can throw at us. All kinds of fun to survive.

For Leon and Jill, it does look like they will have a bit more to add to the matches of Dead By Daylight than just some cool skins. In addition to being hardier characters, Leon will spawn in flashbangs into the maps for the survivors to use against the Killer. These will blind and distract the Killer if used correctly. Jill will bring in the ability to place a mine on generators that will do about the same thing if the Killer gets too close or tries to tamper with things. All of which will be useful to better survive the horrors within Dead By Daylight and give us another IP in the growing list of it all. Have a look at the latest tease and then wait a few weeks to be able to experience it all for yourself.

From the ravaged streets of Raccoon City to the black Fog of the Entity’s Realm. The hunt is on…

The Resident Evil Chapter is coming to Dead By Daylight on June 15th. It includes a Killer, The Nemesis; two Survivors, Leon S. Kennedy and Jill Valentine; and a new map of the iconic Raccoon City police station.

With Resident Evil arriving in the Entity’s Realm on June 15, now’s the perfect time to step back into the Fog and sharpen your skills.

Are you excited to get some Resident Evil mixed into your Dead By Daylight or did you want a different IP to come in here? Do you like the characters and creatures that have been selected or would you have rather seen some of the other iconic beings from the IP here? Were you expecting a bit more out of Jill and Leon or does this fit with the balance of things as well as the character types? Let us all know what is on that brain down in the comments and then discuss it all. If we have more to offer up for Dead By Daylight, you know we will have it here. Just keep checking back in for all of that and much more as time moves forever forward.