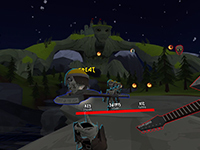 Heavy Metal VR Rhythm game, God Of Riffs, will be hitting an Early Access in July to see if you really are the God Of Riffs out there

When it comes to rhythm and VR games out there, we all know there is one leading the way, which is why it is nice to see another one going out there as we have for God Of Riffs. It is one coming from Boss Music Games and Vyersoft for the Oculus hardware via Steam that looks to bring the style of game to those who prefer some harder music out there. Harder by the way of God Of Riffs bringing some heavy metal music in the flow of it all while using the basic gameplay loop we have seen in other rhythm games out there. If it is not broken there is no reason to fix it. Just expand upon what it can do and offer up something to a whole different player base of gamers out there. I am fully on board for this besides just modding what is out there already.

If God Of Riffs sounds like something that could be your jam, pun intended, then you will be able to get in on it this coming July 27th with an Early Access kicking off then. If you need a little more convincing for it all, we have a little bit of a teaser to see how the game is going to look and sound when it does come. It is currently nothing to write home about in terms of looks but seems to capture that gameplay element fairly well as we have seen in the past. It also sounds like the music will be written just for God Of Riffs and might not offer up the songs we have in our playlists currently. I mention that as Beat Saber was in the same way and before and after it launched we were able to get some amazing visuals and the addition of modding and broader song selections. This could have the same draw, as I know I have added in many metal songs to the other but it does not come with the added fun of slicing skeletons with guitar axes as this one does.

Do you think that God Of Riffs will scratch the itch of those looking for a VR rhythm game for metalheads? If it does well, can you see the modding community adding in their own songs along the way? Could we also see some established bands adding their music into the mix here or will it all be custom from the developers? Give us all of that feedback down in the comments and then feel free to discuss it all if you so wish to do so. We will update everyone with more for God Of Riffs as we get it and much more. Just be sure to keep checking back for all of that on the site in the coming, days, weeks, and months.