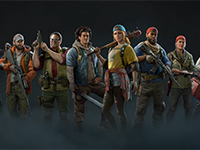 It might sound a bit off, but the cleaners are lined up for our inspection for Back 4 Blood so we can start to work on our gameplay strategies. To clarify, this would be the description given to us for the character classes we will have as they are referred to in the game universe. Given the fact that they are out there trying to clean up the world from the "Ridden" in Back 4 Blood, it makes a bit of sense but not something we generally use when it comes to gameplay elements. The same goes for how Turtle Rock is bringing these infected to us too. The little bit we have here, now, is that they are all worm-infected humans that have been mutated by something even further. We will have to just play the game on October 12th to know for certain, though.

Naming conventions aside, here we get to meet the eight characters we will get to play as in Back 4 Blood and the various different things they can bring to the matches. All of which seem to have two different perks mixed in to help the team while each uses their own style of weapons along the way. All of them fall into the usual tropes we have in games of the same vein, just with the little twists on the for the Back 4 Blood universe. There are two melee types, two run-and-gun types, two sharpshooter types, and two all-around average types. Sure, they might go about it in different ways but if we need to boil it all down into gameplay mechanics, this is how we will go about it. This design also makes it easier to have teams with the same style of character but not have the same toons running around at the same time.

On top of these cleaners we have here, there are also a few new and old looks at some of the infected for Back 4 Blood we will be clearing off the streets in the game. Some of them look and sound vaguely familiar to other titles that Turtle Rock has out there, so it is starting to feel like a spiritual follow-up more than a new title. Like when you look at the Breaker, Snitcher, and Hag here, you can kind of see how they might be more than just horror game tropes. Like the Breaker being a massive and lumbering character that looks like a gorilla made of flesh, the Snitcher being a tall and lanky creature that calls all the other Ridden to its location before attacking, and the Hag is more or less a name clone as it will just eat us in Back 4 Blood instead of doing things as the Witch did in other titles. You, hopefully, see where I was going with all of this.

Back 4 Blood — Meet The Cleaners

It’s not the cleanliest gig, but someone’s gotta clean up this world. Meet the Cleaners, a rag-tag group ready to eradicate the Ridden… or die trying.

Do you see which character you are going to play when Back 4 Blood drops on us or will you spend time with each to see if your tastes have changed? Do you see the links to their past titles or am I reaching a bit based on design and names alone? Could we actually get to a point in this title where we do clean the streets completely from the Ridden or is that just a pipedream to keep the game moving forward? Let us all know down in the comments and then feel free to discuss it all as you so wish to do. If we have more for Back 4 Blood, we will share it all here for you. Just be sure to keep checking back for all of that and everything else that could be out there in the coming weeks and months.