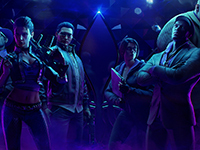 The remaster for Saints Row: The Third is now heading to the next-gen systems to allow for more Saints Row fun in the wilds

The rumors that were out there seem to be true, as we have confirmation that the Saints Row: The Third remaster is now heading to the PS5 and Xbox Series X. Not through any kind of backward play, as that was already kind of a thing, but in a full upgrade that will give us all the options and features we may have been looking for over the last year. That and Deep Silver most likely wanted to tap this new generation of hardware to bring us the final-final version of the game here. That is not to say that Saints Row: The Third was not a great title to experience, but it just feels like we will see so many more versions like this from all the great titles of the past. As long as the developers and publishers out there have anything to say about it all.

This new update will be out there on May 25th for those looking to enjoy more of their Saints Row on the new consoles and can look forward to giving it all a go on the PC on May 22nd here. This new upgrade will bring what we saw come out last year for the remaster but also bring with it 4K resolutions, 60 FPS, and the same basic updates we normally get to allow the game to load and run faster on these other platforms. It is just one more way to be able to play Saints Row: The Third Remastered more or less, and that is always a good thing. That is the assumption here, as many might have missed out on it all from the last time it launched and the time before that. These developers do like making sure we are always getting the next big version of their classic games, do they not?

On May 25, Saints Row: The Third Remastered will bring the mayhem to Xbox Series X | S and PlayStation 5.

This version will also be free to all current owners of the game, and will allow players to experience the game running at greater performance settings; equivalent to the PC edition at High settings.

Improvements made to the Xbox Series X and PlayStation 5 version include a framerate boost to 60 FPS and dynamic 4K resolution, whilst Xbox Series S players can choose between Performance (60 FPS) and beauty (30 FPS) modes.

Of course this version will also take advantage of the SSDs in the new consoles to serve much faster loading times. Plus, by popular request, we have added Saints Purple to the glow color on the DualSense controller.

To add to the Saints news, we can confirm that Saints Row: The Third Remastered will be available on Good Old Games on May 22, launching alongside the Steam version.

We are happy to confirm support for cross-generation Co-Op (Xbox One to Xbox Series X|S & PS4 to PS5). You can also carry your original save over.

Was it a bit expected to see that we would get this update for Saints Row here and will we see it for the rest of the IP over time? Do you think these new upgrades and updates will justify going through it all one more time with your old save files? Is this more for the newer gamers out there instead so they can give it all a go to see just what they might have missed before? Let us all know down in the comments and then feel free to discuss it all if you so wish to. We will keep the news for the Saints Row: The Third remaster and the rest of the IP flowing to you as we can. Just be sure to keep checking back on the site for that and everything else that we have to offer up.