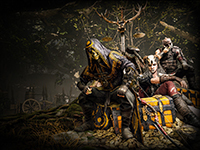 Hood: Outlaws & Legends has launched out there and for those that need one more reason to get in on Hood, we have a new trailer

Today is the day that Hood: Outlaws & Legends is hitting us out there and all of those that skipped out on the early access to it all can now join in on the PS4, PS5, Xbox One, Xbox Series X, and PC. It is the official release date and not just a bit for those that opted to shell out more money for the chance to play a bit more with this multiplayer title here. We have kept a close eye on it all for a while now and will keep doing so too. Now we have one more push from Sumo Digital to get more gamers in the mix for Hood to still more loot and kill more of the Sheriff's guards out there in the mix. If you did not have enough to go on for that as of yet and want a little more to tease you right into it all.

This is definitely more of an enticement video for Hood here instead of anything that shows off some true gameplay here. It is kind of fun to see how some of the matches could look if we were able to get insanely cinematic with it all, but that is what it is at the end of the day here. There are some highlights for each of the characters, slightly, but this is definitely more of a reminder for those that missed out that Hood: Outlaws & Legends is launching today, May 10th, and need to know they can download and jump into after a day of work. If you so wish to play a PvPvE with seven other gamers out there in addition to yourself. Have a gander so you know what you might be missing out on.

Hood: Outlaws & Legends, the multiplayer PvPvE heist game from Sumo Digital and Focus Home Interactive is available now! Matchmaking in opposing teams of four, choose your character based on your preferred playstyle, or what best fits your team’s strategy — cooperation is key for victory in Hood’s nail-biting matches. Watch the Launch Trailer and join the action with your gang of outlaws!

We are all Outlaws… but some of us will become Legends

Faced with a merciless, unchecked state, rebels and rogues battle to claim their place among legends. To win influence with oppressed people, rival gangs compete in daring heists to hit the wealthy where it hurts. Folk hero or gold-hungry outlaw, only the best will escape with hard-earned riches.

Two teams of 4 players compete to execute the perfect heist, in medieval environments patrolled by deadly AI guards. With the unique skills and mystical abilities of each character, moving in stealth to steal treasures unseen or dominating through loud and brutal combat.

Blood will be spilled. Riches will be stolen. Legends will be reborn.

Hood: Outlaws & Legends is available now on PlayStation 5, Xbox Series X|S, PlayStation 4, Xbox One, and PC. Get the Year 1 Edition, including the base game and Year 1 Battle Pass Pack, to access three premium Battle Passes, due to be released after the initial free Season, for a year of exclusive cosmetics!

Have you been playing Hood already or did you need this little reminder that the game was coming to us? Do you think that it will be possible to have your matches play like this all looks or will it be much more mundane at the end of it all? Will the game be able to hold up until the next character flows out there or will that be a bit of a stretch given how many games out there usually play out? Let us all know down in the comments and then feel free to discuss it all if you so wish to. We will keep all of the updates coming for Hood: Outlaws & Legends as it is given to us. Please keep checking back in here for all of that and everything else we could have to offer up.