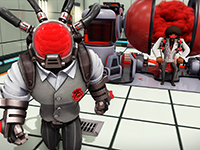 New DLC for Evil Genius 2: World Domination is out there and it brings all kinds of new things for those Evil Genius players to use for world domination

It was not that long ago that Evil Genius 2: World Domination dropped on us all and helped us get back into this genre of game and the style it was all told in. I know I have had a whole lot of fun with the base game so far and am always looking for new and interesting things to do in it still. This is where Rebellion is stepping in one more time for Evil Genius 2 and dropping some sweet, sweet DLC on all of us PC gamers out there to further expand not only the bases but some of the story in the game. Well, more of the side stories but it is something to play through instead of trying to build the perfect base that kills everything while you sit around and watch with glee.

There was already a whole lot to do in Evil Genius 2, but this new DLC adds in a New Henchmen (Espectro) that comes along with a Side Story to unlock and add into the crew. Adding into the crew can also bring along some new things for the Lair and other objectives too. That is also to add in the other skins and minion packs that will come with it all too. Some of which will change up the current Henchmen to link up with the new content in Evil Genius 2 here while we interrogate Agents with lasers that will cut them down the middle. You know, that old super-spy trope except for the fact that we will actually be able to get it done in the most cartoonish way possible here. Have a gander and see what you can add in as of right now if you are so inclined.

A new wannabe Super Agent is on the scene in Evil Genius 2: World Domination’s brand new DLC. Can you defeat the mighty Espectro?

Behind the red mist of his headgear lies a twisted mind fixed on power, all with the singular aim of your annihilation. Not only can he charge up devastating attacks, but Espectro can also use forbidden technology to create clones of himself. He must be stopped, but more than that, his incredible abilities must be harnessed for your own…

Out today, The Cabal Pack introduces Espectro as a brand new acquirable henchman, along with accompanying Side Story objectives and plenty more: In full, the pack includes:

All of the Cabal Pack content will be available in new campaigns.

The Cabal Pack is available as additional content for Evil Genius 2 as part of the Evil Genius 2: Season Pass. It’s also available to buy separately.

The Cabal Pack is the first drop from the Evil Genius 2: Season Pass, with plenty more lair-building content on the way to satisfy supervillains everywhere.

As detailed today in the Season Pass roadmap, The Cabal Pack will be followed by:

Did you expect to see Evil Genius 2 get these add-ons so soon or does it all fit with how fast things have been for this title so far? What do you think about the new Henchmen we have here and will they actually get to use some crazy illusions in the mix too? Would you like to see some of the gameplay flow like we see in these trailers or do you like to have the top-down view of everything the whole time you are playing in general? Let us all know down in the comments and then feel free to discuss it all if you wish to do so. We will keep sharing what we can for Evil Genius 2: World Domination as it shows up. Just be sure to keep jumping back to the site to see and hear all of that.