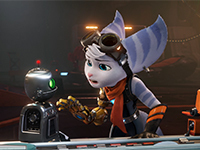 Here we go with a new dimension to take in for Ratchet & Clank: Rift Apart. Something that has been teased a bit in the past with the previous videos we have had and now get some solid gameplay mixed in too. There is still some cinematics mixed in here, so take note of that, but it looks like Insomniac Games is trying to give us a highlight for Rivet and how the character will shake up what we know for Ratchet & Clank a bit. Even if it does come down to being Rivet & Clank when it all boils down. Still a nice mix to it all as we jump different dimensions and try to save everything out there. The normal trope in some of these PS5 games here.

It is hard to see much of a difference between Ratchet and Rivet here, in terms of gameplay, but there does look like there will be something besides just a skin swap here. It looks like Rivet might have a cool blending move out there that could lend to a dodge of some sorts in this Ratchet & Clank. The thing that stands out even more to me here is that we will be seeing some interesting worlds out there as we hop between dimensions. More than we have had teased already. Like one where Nefarious always wins that we see here. It is not clear if that is just how the physics in this world works, but it would be interesting to see how that could truly work in Ratchet & Clank: Rift Apart and if it is something that will make for some hard levels to win on our end.

The intergalactic adventurers are back with a bang. Help them stop a robotic emperor intent on conquering cross-dimensional worlds, with their own universe next in the firing line.

Witness the evolution of the dream team as they’re joined by Rivet – a Lombax resistance fighter from another dimension.

Are you still excited to see this Ratchet & Clank adventure or do you want to see more of it before June 11th comes around? Do you think Rivet will have a different gameplay style in the mix of it all or will it just be a skin and voice swap along the way? How crazy do you think that some of these different dimensions will be or will it not only be as crazy as we might be hoping for? Let us all know down in the comments and then feel free to discuss it all as you wish. If we are able to share more for Ratchet & Clank: Rift Apart, we will certainly have it here. Just be sure to keep checking back for all of that and much more.