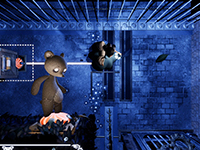 New story bits for Tandem: A Tale Of Shadows are here to help us see what will be going on and why we will be working in tandem in the game

If you are now in the market for a creepy and twisted looking world with a bit of a story, then you might want to keep an eye over here for Tandem: A Tale Of Shadows. This would be a title coming out of Monochrome Paris, a studio, that will be taking us on that kind of adventure this year on the PS4, Xbox One, Switch, and PC. A fun little puzzle game that looks to have worked in quite a bit of inspiration from a specific director that is known for this style of art when it comes to his films. You should be able to piece it all together once you dig into the trailer here for Tandem while also getting the broader story as to why we are a small child walking around with an animated teddy bear in tow. A teddy bear that can break some of the laws of physics at that.

Those that have not just skipped on down to the new footage for Tandem, it looks as if the story for the game will take place in a fantastical version of the world in the Victorian setting. Some of which looks to be in the streets and others in a creepy mansion that we will have traverse with a teddy bear that we found while investigating the vanishing of Thomas Kane. This bear will help us and work "in tandem" with Emma as she wanders the world in a top-down view and swapping to a side-scroll view for the bear. All to solve some puzzles and make it the final boss that is most likely behind the disappearance that placed us on this original quest. That is what would seem to make the most sense here and it would be odd to forget all of that. How else will Hatinh Interactive be able to justify getting this story out to so many when it does come. It is just weird that the story kind of forgets about that as it progresses along here.

When Thomas Kane, the only son of a famous family of illusionists, inexplicably vanishes, 10-year-old Emma decides to investigate. On her way to the Kanes’ manor, Emma witnesses Fenton innocently bounce from a speeding carriage. The girl and the teddy bear chase after the wagon and enter the manor’s grounds. A captivating story of illusory dangers and shifting perspectives begins.

In Tandem: A Tale Of Shadows, fans of puzzle platformers and action and adventure games will be able to peel back the curtain enshrouding five beautiful Victorian-inspired worlds. Players will alternate between Emma’s top-down view and Fenton’s horizontal side-scroller view, using the former’s lantern to cast shadows the teddy bear can cross. Intelligent obstacles and clever gameplay mechanics will force players to constantly remain on their toes.

Did you figure out the inspiration for the look in Tandem here or did you need us to drop the Tim Burton name here? Do you think that the story will stay focused in the larger game or will there only be some of the basics to get us on the gameplay path and keep us there? Do you think that this will work to swap between the two or will that be a mechanic that gets a bit bothersome along the way here? Let us all know down in the comments and then feel free to discuss it all as you wish. If we have more for Tandem: A Tale Of Shadows, know that we will share it all here soon. Just be sure to keep checking back for all of that and much more as we head-on into the future of it all.