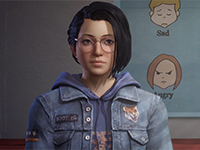 The opening scene for Life Is Strange: True Colors’ Alex is here to watch as we get a little deeper into this character for the Life Is Strange universe

There are still a whole lot of unknowns for Life Is Strange: True Colors since it was first revealed that we were going to be getting this sequel to the line that Deck Nine Games is going down. The IP has always been an amazing journey for the story and bits of gameplay when they weave in the supernatural elements too. Not to mention the fact that Life Is Strange has always been one of the fancier and artsier titles in the Square Enix tool belt for us all. That all said, we have a new glimpse at the character of Alex Chan to take in to help shape the character just a bit more for September 10th when we get to see how this full story unfolds before us.

This new video does not have much in the way of actual gameplay for this Life Is Strange story, but it does look like it is all done with the game's engine. Here we get a little more inside of Alex's head and more on the emotional status of it all. That is the new power we are seeing emerge in the character here after all. The interesting thing is to see the emotional face poster in the background of the character as the questions keep shifting and digging. All while we get to watch it slowly edge out everything but Anger here. It was an interesting direction choice for the video, as it does not feel like the character is coming across as angry. This could just be how we can expect this Life Is Strange story to go while showing us that there are different forms of emotions out there beyond the stereotypes most of us think of when it comes to expression. I weirdly feel what Alex is portraying while not actively looking or acting aggressively. All of which is something I want to see play out in the larger story of it all.

In the opening scene of Life Is Strange: True Colors, Alex Chen speaks to her social worker about her time in foster care and the new life ahead of her.

A bold new era of the award-winning Life Is Strange begins, with an all-new playable lead character and a thrilling mystery to solve!

Alex Chen has long suppressed her ‘curse’: the supernatural ability to experience, absorb and manipulate the strong emotions of others, which she sees as blazing, colored auras.

When her brother dies in a so-called accident, Alex must embrace her volatile power to find the truth – and uncover the dark secrets buried by a small town

Are you looking forward to this next big installment to the Life Is Strange line and do you think it will pay off larger than the previous ones? Did you also catch some of those little details in the shots of this video and do you think it could hold more for Alex's power later on? Do you think the game will truly subvert many of the tropes we have held dear for so long or will it just be to build the game's hype and then not deliver in the final version? Let us all know down in the comments and then feel free to discuss it all as you wish. If we have more to offer up for Life Is Strange: True Colors, know it will be on the site for you as fast as we can get it out there. Just be sure to keep checking back in for all of that and much more as we head forward in time.