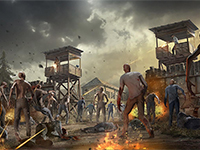 If you have been thinking that the IP was about to die off, look no further than the latest launch for The Walking Dead: Survivors out there to drag us all right back into it all. The next big mobile title out there to keep Skybound flush with money and Elex pumping out another mobile title on the iOS and Android devices for us all. All as we watch the TV series for The Walking Dead start to head the way that the comic lines did. They are all ending soon and the company does not want to let us lose all of our attention to their undead line. Thus, we have the launch of the next title in the line of mobile games with closer to the comics-based designs.

The gameplay for The Walking Dead: Survivors seems to revolve around what we have seen before in their mobile titles. It is a multiplayer "base-building" title that we can head out on our phones to collect resources and team up with others out there to better survive the harsh world filled with the dead and other survivors. The bigger twist this one has over the others is that it will feature over eighty of the characters from The Walking Dead comics for us to use and team up with. It also looks like some of the story elements are there when it comes to the factions, but I have a feeling things will go the same way as the other titles in the same vein have gone. Players will team up to troll others and make gamers waste real-world money on a free mobile game. At least it does look like it could be some fun for the short term and to waste a bit more time out there.

Check out the launch trailer for this multiplayer survival game that features more than 80 characters from The Walking Dead comics, as well as new ones.

In The Walking Dead: Survivors, players must build their own town and then venture forth to search for supplies and survivors while testing their strength against rival players.

The Walking Dead: Survivors is available now on iOS and Android.

Have you already picked up The Walking Dead: Survivors for your device or did you need a reminder that it was coming? Do you think it will end up being as some of the past titles with trolls ruining the fun for the masses? What will be your characters of choice to go with in the game and will it deviate from the "heroes" we have in the comics and TV shows? Let us all know down in the comments and if you plan on giving this one a bit more time than before? I know there will be more for The Walking Dead lines out there and I will offer them up on the site in all of the forms they come in. Just be sure to keep checking back in for all of that and more.