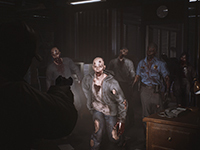 We have had some fun trying to pick apart things for The Day Before back when it was announced, but now we have some better light shed on all of this with a lot of new gameplay. In fact, we have thirteen-minutes of new gameplay to take in here for the game from Fntastic and MYTONA coming to the PC. It is a post-pandemic MMO that is in the works there and might have a lot of people ready to venture into this fictional style of things after a real-world one, but that will be left to see for when the game launches. For now, we have the footage to help entice us to get in and play The Day Before with some friends while we try to outrun and survive some other non-friends. That would be both on the infected and PvP side of things if this new footage is about what we should expect a normal session to go down like.

As you will be able to see here, The Day Before feels like a mix of some of the other post-apocalypse titles we have out there but set in something that feels a bit more rural in America. It also seems like it is not too far after whatever occurred as there is still power and many other survivors fighting over the same resources. You can see this as one group goes into a farmhouse only to trigger the house alarm. Things are still well-stocked, mostly, but it calls the attention of various infected all around. The interesting part is that it looks like things like this could trigger other survivors to know where you are in The Day Before and then head there to claim your items as well. We do not get to see much of this, as the gameplay ends with the survivors we are following finding safety in a bunker nearby, but it could have led to a full firefight and the others walking away with their goods.

The Day Before — Gameplay

Check out 13 straight minutes of gameplay from The Day Before, a new open-world MMO survival set in a deadly, post-pandemic America overrun by flesh-hungry infected and survivors killing each other for food, weapons, and cars.

Looking like a cross between The Last Of Us and The Division, The Day Before is an open-world survival game coming to PC with elements of PvP and PvE, pitting you against other players and the game's take on zombies called infected.

Have you been keeping a close eye on The Day Before since it was first dropped out there or is this the first time you have heard of it? Do you think this gameplay loop will work out for the best experience all around or will gamers find a way to break it and make things intolerable down the line? Do you think that all noises will attract new infected or will they only be in an area for a short while and then respawn after another bit of time has passed? Let us all know down in the comments and then feel free to discuss it all as you wish. If there is more to offer up for The Day Before, we will have it all here. Just be sure to keep checking back for all of that and much more as time marches forward.