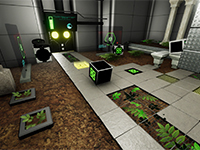 If you are looking for more puzzle games with a fun look to them and will hit the PS4, PS5, Xbox One, Xbox Series X, Switch, and PC, then you need look no further than The Last Cube as of now. Well, you can look further, but this is another one to add to your list with the announcement from Improx Games that we will see it hit all of those platforms this year. Not only that, but those looking to pick up The Last Cube on the PC are currently able to give the game a try with a bit of a demo to see if it will be something you will want to add to your list when it does fully come out there. Not too shabby of an announcement to have for the game or for those that may not have heard of it in the first place.

For those not in the know for The Last Cube, it is a new brain-teasing game that will have us solving all of these puzzles as a cube that can move about and control other cubes along the way. Sometimes to make it from a floating platform to another and other times to figure out the patterns of buttons and switches to land on with the different faces of each. All while moving through an interesting world and haunting environments. I have a feeling there is much more to it all for The Last Cube, but that is the fast take from the following trailer and what we know so far. It is, more or less, exactly as we should all be expecting from the title and bits of gameplay we have to look at.

Improx Games are proud to announce that their brain-teasing puzzle adventure game The Last Cube is coming to PC, Switch, Xbox, and PlayStation platforms later this year. Set in a series of surreal otherworldly landscapes, it’s up to you to discover the history of this mysterious alien civilization.

The Last Cube is a richly atmospheric puzzle game about guiding a cube through a plethora of moody, monolithic chambers as you uncover the story behind this peculiar world. Explore a wide array of brutalist architecture ranging from foggy nightmarish abysses, to oppressive lava-lit factories, to uplifting natural landscapes full of golden rays of sunshine glistening against mountains. Coupled with an epic soundtrack that thoroughly enriches the atmosphere, and an abstract story of a dying world on the cusp of ruin, The Last Cube is a moody, mysterious puzzler that fully immerses you in its derelict world.

Each of The Last Cube’s stages introduces a new type of sticker you can latch onto a side of your cube, introducing an entirely new mechanic. Some will allow you to dash through barriers, others will create makeshift stairs, and some grant the ability to teleport over bottomless gaps or conjure temporary, but useful cube friends. Positioning your cube to acquire the desired stickers on the correct surface can range from pleasingly simplistic, to masochistic head-scratchers as you scramble through The Last Cube’s 100+ puzzles. New mechanics are introduced at a breezy clip, rapidly expanding one’s perception of what your cube is capable of.

Clamouring through each chamber offers a sturdy challenge, though only the most dedicated players will uncover all of The Last Cube’s bevy of collectibles and bonus stages littered throughout the adventure. Do you have what it takes to solve the puzzle tracks left by your ancestors and save this peculiar world from collapsing?

Will you be picking up The Last Cube when it drops on the consoles or will you be part of the PC gamers out there that will gobble it all up? Do you think that we will have a vast difference between all the platforms or will it hold up across them all without issue? Do you think there is something more sinister going on in the background of the game or is it really all what it looks like? Let us all know down in the comments and then feel free to discuss it all as you wish. If there is more for The Last Cube, we will obviously have it all here. Be sure to keep checking back for all of that and much more out there.