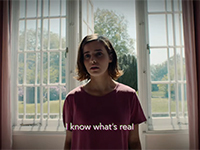 FMV-based title Erica, will now be bringing this harrowing tale to PC gamers that might have missed out on Erica before

Get ready to add another new release date to the list, as Erica has one more for us when it comes to the PC version of the game that I am sure many out there have been waiting for. It launched way back on the PS4 in 2019 and then most recently on the iOS back in January. Now that it seems like the exclusivity is up for it all, Flavourworks is now bringing Erica over to Steam for a whole new wave of gamers to enjoy. All of which will be there on May 25th for those that have been patiently waiting. I am always glad to see games jump platforms when there is little reason to keep them as an exclusive title.

If you have no clue what Erica is or was before now, that is not a huge surprise. It was another of the recent FMV story games that began to make a resurgence. This one placing us in the titular role of a woman that has survived some childhood trauma but then is forced back into the think of it all with some otherworldly things going on. All of which giving us the option to dictate how this 90-minute film will play out and see how our version of Erica will end. These can always be quite a bit of fun and I know I missed out on the last few times it launched, but I am ready to see trends like this come back into the mix. I mean, it was an FMV game that helped shape many of the things we now love in the industry and I can see it being the case one more time if it is done just as perfectly.

Flavourworks, pioneers in FMV based narrative choice games, today announce that their premier title Erica will come to Steam on May 25th, 2021.

Previously a PlayStation 4 exclusive that launched on iOS on January 14th, Erica puts you in the shoes of a woman who after surviving a traumatic childhood, is thrown back into a life of mystery and occultism in her adulthood to solve a mystery which has plagued her. Entirely developed using their patent-pending Touch Video game engine, Flavourworks have brought real life into video game form, allowing the player to interact with objects in the world using their own touch.

With an award-winning soundtrack from Austin Wintory (Composer of Journey, The Pathless, Abzu) and a stellar cast led by Holly Earl and Terence Maynard, will you lead Erica to a grisly fate or unearth the shocking secrets of Delphi House?

Did you have a chance to play Erica already or will this be your first jump into the title altogether? Do you like FMV titles and do you think they still have a place for us all in the industry or should they die off like the dinosaurs? Why do you think it took so long for the PC gamers to finally have their shot at the game and will it make a bigger splash once more? Let us have all of that feedback and more down in the comments and then feel free to discuss it all as you wish. If there is more for Erica, we will add it to the site for everyone. Keep coming back here to see and hear all of it as it will flow out there.