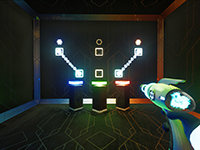 A new first-person puzzle title is on the way with the announcement for Faraday Protocol to hit the PC this year. A title that Red Koi Box is crafting for us all that will be in the same vein of Portal and The Talos Principle. You know, we will be put to tests moving about an alien environment to us while solving some physics and energy-based puzzles along the way to most likely escape. It is a solid premise to go with if we can get some great puzzles mixed in. Something that Faraday Protocol already looks to have under control with the "gun" here allowing us to link power and move some energies around.

You can see a bit of it in motion for the new trailer that we have here for Faraday Protocol to go with this announcement and also how it will stand apart from the other titles besides the basic mechanics explained there. While we do find ourselves in a literal alien location, it is a blend of Sci-Fi and Art déco instead of the more industrial style of things from the other titles. We will not be firing off portals to walk through, but there will be some form of "shooting" in Faraday Protocol to power up or down what we need to make the connections to move along. As long as we get some truly inspired puzzles along the way, I have no care if things feel similar in scope to these other titles and it looks like that is what we have so far.

Stranded on the mysterious space station/biosphere OPIS, the alien archaeologist Raug sets out to find out more about this place that has been abandoned for tens of thousands of years. On his journey, he will have to solve the many puzzles of OPIS and find out more about its mysterious governing A.I. "IRIS".

To solve the puzzles of OPIS you use the so-called Bia-Tool. This alien utility allows Raug to absorb certain forms of energy and redistribute them, activating and manipulating the machinery on the space station.

You can activate and deactivate power lines and devices with orange energy — or bridge and re-route them using the blue energy.

You'll have to solve many interesting and challenging puzzles, inside and outside OPIS' Ziqqurats, to progress and solve its many mysteries!

Do you like what we are seeing here for Faraday Protocol out the gate or will you need to see more before making up your mind? Do you think there will be more of the physics-based elements with the bouncing pads we see in this footage or will it be that with us shooting down power lines along the way? What do you think of the style the game is going with and will that be a nice change of pace for it all? Let us all know down in the comments and then feel free to discuss it all as you wish. If there is more for Faraday Protocol, we will have it all here. Just be sure to keep checking back for all of that and much more.