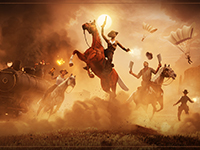 A new battle royale title, GRIT, has been announced with players taking control of some rough riders with true grit

Wild West Battle Royale is not a game I thought I would hear about any time soon, but here we are with the announcement for GRIT. This is a new title coming to the PC in just that vein and from the aptly named Team Grit developing it. All so we can saddle up and try to be the best gunslinger or horse rider in the town and keep the rest off our little mountain. With 100 players in the matches for GRIT, that is going to be one tough job but I am sure there will be plenty of them out there to do it. We will only have to wait and see for now. Well, if you do not want to get in on the beta that is kicking off as you are reading all of this…

When it is all boiled down, GRIT sounds like a basic Battle Royale title with a fun Wild West twist. As I mentioned, though, there is a beta for those that want to dip their toes in right now and it seems to be running over this weekend as well. All at various times that you can see below. It does look like we will get to see not only how the combat in GRIT works out but how the horseback riding, firearms, and melee weapons of the times will be implemented to take everyone else down. It even sounds like there will be a 1v1 dual to see if you can stay in the match that fits the theme of the game fairly well too.

Team Grit, a new game development and publishing studio established by industry veterans, has today announced GRIT, an all-new Wild West Battle Royale where players test their merit against 99 other opponents in the ultimate showdown.

Players have a chance to start playtesting in an early beta build starting today where they can immediately jump into the lawless world of GRIT. The first beta test starts Today — Friday, April 2nd, at 8am PT — 4pm PT with the second beta test beginning Saturday, April 3rd, 4pm PT — 6pm PT and finally the third beta test happening Sunday, April 4th, 4pm PT — 6pm PT. Future beta tests are planned before the game heads into Early Access, but for this beta weekend limited keys are available, so get your GRIT Key now on Steam before it’s too late.

Saddle up and ride across town, building the best poker hand from found weapons to make a killing. Grab the best shooter to-hand and gun your way to infamy on the new frontier.

Explore the towns, oil fields, and plains of the untamed west as you try to hitch a ride on the last man alive train. But hold on to your 10-gallon hat — it’ll protect you as you’re shootin’ up a storm!

If a gunslinger shoots you down, keep your hat on — a 1v1 wild west showdown could put you back in the game if you got a quick draw.

What do you think about what we are getting here for GRIT and did you expect to hear about a game like this anytime soon? Will you be joining in on the beta test over the weekend to see how it all goes or will you wait for the full launch? Do you think it will still boil down to a quickdraw when trying to stay alive or will it just be a 1v1 skirmish to give you one more chance? Let us all know down in the comments and then feel free to discuss everything as you wish. If we have more to share for GRIT, do know it will be here on the site. Just keep riding on by to see and hear all of that as it comes.