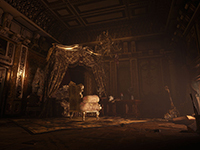 It was interesting back when Resident Evil Village was first announced and we had word that it was going to be a PS5, Xbox Series X, and PC exclusive. Then, recently, Capcom shocked many out there that it was going to be on the PS4 and Xbox One too. Almost no one is going to miss out on this Resident Evil now and that is always a nice thing. Even if it does bring in the concerns on how it will look and function on those platforms too. The worry can be put aside just a bit as we do have some gameplay to see how it all looks on the PS4 Pro now.

There really is no way to truly see how it all flows visually with the way the video is processed here but it is a whole new segment for Resident Evil Village to look at that also highlights the countess and some sewer segments. That is the better look that we have to get a feel for how the story is going to go and how some of the enemies will pop up. Also, there is a hint at a bigger villain out there in Resident Evil that she answers to after Ethan has taken out some of the daughters in the mix. Have a look and see just what we are talking about here and get ready for May 7th to finally come to us.

Will you be playing Resident Evil Village on the last-gen systems or will you be lucky enough to play it on the next-gen? Do you see anything concerning when it comes to the visuals or is it hard to tell given the video compression? What do you think is going on in the story of it all here and will there be a bigger villain in the mix of all of this? Let us all know down in the comments and then feel free to discuss it all. If there is anything more to share for Resident Evil Village, and we know there will be, it will be shared on the site here for you. Keep checking back for all of that and everything else we may have.