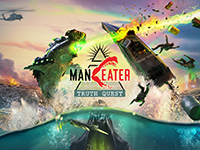 A new expansion is coming to Maneater that will dive into more of the conspiracies out there with Maneater: Truth Quest

If you thought you were done with that amazing shARkPG of Maneater, it is time to know the real truth. You are not. Tripwire Interactive is not. Now we have some new DLC and expansion coming to us this Summer to keep the eat 'em up title flowing on all of our systems and us chomping down on all those horrible humans out there. All with a new little twist to explain the weirdness going on in the waters of the game. A new conspiracy ViewTube channel is kicking off with the show Maneater: Truth Quest. That is the show of the in-game episodes we are getting before you think this is something in the real world out there.

All of this stems from the theories of the residents that are trying to make sense of our bull shark in the core of Maneater with two new episodes for us to experience with the same team and voices we have enjoyed thus far. The level cap for our evolutions will be increased with this new DLC along with some new wildlife and hunters for us to face off with too. Also mixed in will be two new objective types that will focus on the Tail Whip mechanics to kill humans on the beach and then a time trial to put the swimming mechanics through their paces. I know I am ready to get back into this apex predator to let the blood flow on more time out there. I just hope it is early in the summer and not later.

Developer and publisher Tripwire Interactive is proud to share first details for Maneater: Truth Quest, the upcoming downloadable content (DLC) for 2020’s eat ‘em up hit, Maneater. Coming this summer for the PlayStation 4 and PlayStation 5 computer entertainment systems, Xbox One and Xbox Series X/S console systems, as well as PC (via Epic Games Store). Maneater: Truth Quest continues where the story left off following the thrilling conclusion in Maneater, the original award-winning Action-RPG (shARkPG) where you play as a shark.

Starring the titular and evolved bull shark protagonist — and Chris Parnell (Saturday Night Live, Rick and Morty, Archer), reprising his role as investigative journalist Trip Westhaven, Maneater: Truth Quest will take players down the rabbit hole of dark secrets and conspiracies surrounding Port Clovis and the Naval Wildlife Organization (NWO). The original stories of animals growing bone-like armor, emitting flesh-eating toxins, or using electricity as a weapon were simply just old fisherman's tales. That is until conspiracy theorists everywhere pointed to the original Maneater as solid proof of a Government coverup. Trip Westhaven, driven to the brink of madness, fires up his ViewTube channel “Truth Quest”, to take his followers, the “Questers” into deep waters in an effort to uncover the dark secrets behind this whale of a tale.

With two new episodes and an entirely new region, the Maneater: Truth Quest DLC is packed with new evolutions, challenges, wildlife, and more! Players will once again take control of the apex predator of the sea to Eat, Explore and Evolve their way to the top of the food chain. A small taste of new features and content include:

Did you expect to see this kind of DLC for Maneater or did you think that the game was over for now? Do you think these new evolutions will add in something to move away from the over-powered ones we already have? Could this all build into a second game over time again or will we only see smaller "episodes" flow out there instead? Give us all of that feedback down in the comments and then feel free to discuss it all as you wish to. If there is more for Maneater in any way, we will offer up to you all here. Just be sure to keep checking back for all of that and much more all of the site.