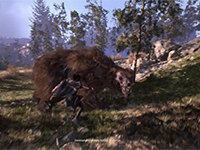 Not that long ago we were presented with Forspoken as it shifted from being to Project Athia to this new name and now official game for the PC and PS5. It was a title many of us have been keeping a close eye on and that is still flowing the same way even with the name change. Now we are back with a new look at the same announcement trailer but in an extended form. Why we had to wait two weeks to get this is beyond me, but it has us all talking about Forspoken and my guess is that was the actual reason. That and for us all to take in the little bit more for the gameplay we did not get the first time. It would have been better to do it all in one shot in my opinion.

No matter the case, here we go with the extra few seconds in the mix for Forspoken. This time it seems to focus more on the zombie bear we saw very little of in the first shot and now we get a whole extra few seconds to look at. Not much, until you try to figure out why the bear is in this state. The model and textures for the beast seem to suggest that it is not a reanimated corpse of a bear but maybe one that suffers from a disease in the real world. One that makes animals, specifically deer, ignore the pain in their body and thus can have chunks of flesh missing down to the bone. Giving them all the same look that we have here in Forspoken. Maybe this is part of the lore and why the world is in the state that it is in here to a degree. Sure, there will be some magic in the mix but given the real-world setting in the background of the destroyed buildings, this could be part of why the world has changed. Even if it is a different one than Earth that we know so far. Who would have thought that 3 seconds of footage could have caused this kind of shift in thinking for the game?

Introducing Forspoken, the new narrative-driven adventure set in a beautiful yet cruel world.

Play as Frey Holland, an ordinary young woman who must harness her magical abilities to survive in the fantastical yet dangerous land of Athia.

Developed by Luminous Productions for the PlayStation 5 system and PC, Forspoken will take players on a magical and perilous journey.

Stay tuned for more information to come later this year.

Did you see more for Forspoken in there than these few seconds or was that about it for you too? Do you think that we will see this kind of virus in the mix of the story or will it stick to the fantasy more than anything here? Could we see other reanimated corpses out there or will this just be a one-time boss we have to face with Frey? Let us all know down in the comments and then feel free to discuss it all as you wish. If there is more for Forspoken, you know we will have it all here for you. Be sure to keep checking back for all of that and much more as we head toward the launch of the game. I know we will have more to see as we march forward.