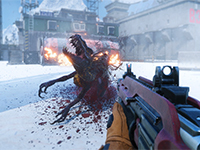 A little over a month ago we had word that those Xbox Game Pass holders were going to have a chance to get in on Second Extinction before the full release as the PC gamers have been in on the Early Access already. There just was never a final date for everyone to look forward to and Systemic Reaction kind of went silent after that. Well, in terms of all of this and until now with the announcement that Second Extinction will be out there on April 28th for those looking to have the fun there. Shooting mutated dinosaurs always sound like an amazing time to have in a video game. Am I wrong?

To go with this announcement, we have a new video to look at for Second Extinction to help highlight just what the game is about and how it is looking in this early stage of things too. All in all, it still looks like a blast of a time and follows the basics of the FPS style of game. As long as it holds up to all of that and skips the basic pitfalls that we can see games take, Second Extinction could shape up to be the next big dino-shooter out there. I am sure this is why we are in these early access stages so the team can make sure that the game fills all the needs we may want in our games right now. If you are going down this specific path at the very least.

Will you finally be giving Second Extinction a go on the Xbox next month or will you hold off until the final version is here for us all? Do you think we will see much in the way of changes over time or is all of this to iron out any of the smaller bugs the devs might have seen? Can we really go wrong with this kind of title out there or is there still room for it to go too far off the mark? Give us all of that feedback and more down in the comments and then feel free to discuss it all. If we have more to share for Second Extinction, you know it will all be here for you. Keep checking back for all of that and much more.