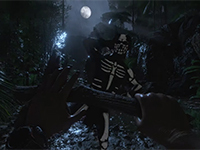 It was not a huge secret that Green Hell was going to head over to the PS4 and Xbox One sooner or later, and now we have a bit more of a timeline to look forward to. No longer is it a nebulous "when" will Creepy Jar give more gamers a go at this survival title. We now know that the console version of Green Hell will be hitting the platforms in June. Okay, so it is still a little bit on the vague side of it all but only in terms of thirty days and most of those we can count out given how video games normally launch. We do know it will be in June now so there is that to look forward to if you felt like you were left out of it all for a bit more than you should have been.

Now that we have that out of the way, here we go with a new and short video for Green Hell that we can assume is coming from the console version of the game. We are going to be seeing all of the new updates that have rolled out since it first hit the PC, obviously, and will have some solo and co-op action to have in the mix of it all. I would also go on a limb and say that the DLC for Green Hell should be coming in some form too. I would also like to hope that the PlayStation crowd might get a PSVR addition too, but that might be hoping for too much as of right now. I guess we should all just be happy with what we are about to get and just go with all of that.

We are thrilled to reveal that Green Hell will be making its way to Xbox One and PlayStation 4 this June. Set deep in uncharted regions of the Amazon rainforest, Green Hell will challenge you to survive harsh environments with danger lurking around every corner.

Will you be diving into the Green Hell this June or did you already take that trip on your PC? Do you think we will see all of the DLC and expansions head over there too or will that be far off down the line based on how well it does on the consoles? Will you be going in solo or will you be taking some friends with you into the jungles? Let us all know down in the comments and then feel free to discuss it all if you wish to. When there is more for Green Hell, we will have it all here for you. Be sure to keep checking back for all of that and everything else we might have to offer up.