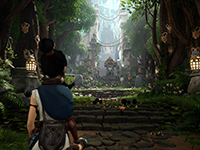 New footage for Kena: Bridge Of Spirits is here from the Future Games Show and it gives us more of what we can expect in Kena this August

Every time I see more for Kena: Bridge Of Spirits I get more and more excited for this game. Even if it does not look like any of the grimmer and darker action games we have had over the years, it looks like Ember Lab is putting together some just as special to keep us engaged and entertained. Who knows, maybe there will even be some of that darker stuff mixed in given what we have to compare the title to with all the other forms of media out there. Kena might be more than just a third-person action game with much more going on underneath it all. That or it could be an uplifting and fun title to have on the PS4, PS5, and PC on August 24th.

With that all said, we have some new footage for Kena fresh from the Future Games Show that gives us some of the old and some of the new for the game. Most of it is going to look about the same as what we had before, as it is the character moving about some fantastical worlds and beating down the same enemies we have seen before. The bigger takeaway, for me, is that it does look like Kena: Bridge Of Spirits will be using this one-shot style to the gameplay and scenes while looking as stunning as a Pixar film at the same time. These kinds of games always suck me into them and help with the immersion to the story. Even if that is still a little hidden along the way still. Thank the gods that we only have a few months to wait until we get this amazing looking title in our hands.

Kena: Bridge Of Spirits is an upcoming action-adventure game developed and published by Ember Lab. The story follows Kena, a young spirit guide who uses her magical abilities to help deceased people move from the physical to the spirit world. The game is presented through a third-person perspective.

Do you still have the same level of hopes for Kena as I and did this just bring them up higher? Do you think that we will get a true one-shot camera in this game or will it be broken up into scenes when not in the gameplay? Do you like titles like this one is looking like it will be or do you prefer the darker and grittier version of these kinds of games? Give us all of that feedback down in the comments and then feel free to discuss it all as you wish. We will keep the news and footage for Kena: Bridge Of Spirits flowing out here as fast as we can get it. Be sure to keep checking back for all of that and much more along the way.