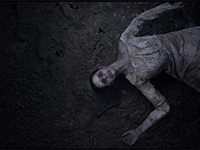 If you had no clue up to now, photography will play a large role in Martha Is Dead and it seems like it will be a large way we uncover some of the darkness in the game's narrative. I am sure there is going to be a whole lot of that mixed into the game here and now we have one more tease of it all from LKA as to how that will look. Not too surprisingly, just as grim as the rest of the visuals we have seen for Martha Is Dead in the past as we wait for the game to the PS4, PS5, Xbox One, Xbox Series X, and PC. I guess it is good that we only have a tease for it all from the Future Games Show and not something setup to disgust us all along the way.

In this new trailer for Martha Is Dead, and I should say teaser more than anything, we get a bit more of that detail in the mix with all of the other ominous stuff we have seen before when it comes to this title. There is not much more to say about it with how little there is but it does look like it will fit into the world that we have seen crafted thus far and where we all figured the game would be going in general. It is something to look at for Martha Is Dead, though, so that is the bigger bonus to all of this here. Have a look at the little bit we have and see if it will sate any hunger you may have for this game up to now. Maybe it will and maybe it will leave you wanting a whole lot more.

Wired Productions is excited to lift the lid on a brand new trailer showcasing more detail on Martha Is Dead, including a first look at photography and how this is integral to the gameplay experience.

Having made its debut at the Future Games Show, this new trailer serves as a smart teaser for what’s to come on PlayStation, Xbox, and PC later in 2021.

Developed by LKA, the studio behind the celebrated psychological adventure The Town of Light, Martha Is Dead builds upon the studio’s signature style of deep multi-layered narratives, combining real-world locations and links to historical events with superstition, folklore, and deep psychological distress.

Was this about what you expected to have here for Martha Is Dead or did you want to see more? Do you think we will have to go around taking pictures of all of the horrific things in the game to progress or will it be a sub-mechanic to further the investigations from time to time? Are you still craving more for the game or will you just be sitting idle until we get a longer and full gameplay breakdown here? Give us all of that feedback down in the comments and then feel free to discuss it all if you wish. When there is more to offer up for Martha Is Dead, know it will be on the site for you. Just keep checking back for all of that and more.