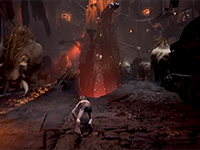 Gameplay for The Lord Of The Rings: Gollum is out there now with a little more showing off just how Gollum will play out

Just as the character that the game will be revolving around, a little more is sneaking out there for The Lord Of The Rings: Gollum. This time in the way of a little bit of extra gameplay for it all and not the cinematics we have seen from Daedalic Entertainment up to now. This time we have a whole whopping 40-seconds of gameplay to look at. It, thankfully, does offer up quite a bit on how Gollum could be playing and handling. Not to mention a look at a few more of the game's locations and other creatures that will be stalking the lands out there. Definitely, something to write home about with what we have had up to now.

Just as many assumed, Gollum looks to be more of a stealth game in general as it should be. We have a few glimpses of the guy climbing and hanging on some ledges to sneak past everything. Then there is a small segment where our guy is skulking past a bunch of beasts and a few caretakers to make his way without being seen in a different location. The game is definitely giving me some feeling of Styx just with the The Lord Of The Rings flair to it all. That could be an amazing option to go with as that stealth game felt like it could take place in this universe and be related to Gollum in some way or another, and those titles were so much fun to play around with. It will be fun to see what they do here after this little tease.

The Lord Of The Rings: Gollum — Sneak Peek

The Lord Of The Rings: Gollum is a story-driven action-adventure. Take on a perilous journey as Gollum, chasing the only thing that is precious to him. Gollum is skillful and cunning, but also torn by his split personality. One mind, two egos — you decide!

Was this all about what you were expecting to see in a video game about the exploits of Gollum or did you want something different? Do you think there will be more to the game instead of skulking and stalking around the maps trying not to be seen or will that be the core of it all? Do you think it will build into the whole story more or will it just be a telling of things we already know with little more to expect along the way? Let us have all of those thoughts down in the comments and then feel free to discuss it all if you wish. When there is more for The Lord Of The Rings: Gollum to share, we will share it all here. Just be sure to keep checking back for all of that and more.