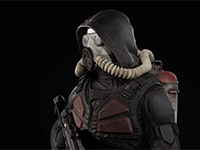 Here we go with a new update for S.T.A.L.K.E.R. 2 to see just how far the developers out there have brought the game so far. It has been a slow roll to get it out there but GSC Game World but we will take everything we can get to look at and enjoy. Even if it is a very basic and generic update we have here without much in the way of gameplay for S.T.A.L.K.E.R. 2. In fact, we have no actual gameplay here and it is all an update as to the visuals and options that we will see to keep things fresh. They now have a way to alter the smiles of all of the NPCs as a bit of a tease to the following video.

Okay, get ready to see a look at more of the character design and weapon design for S.T.A.L.K.E.R. 2 more than anything. It does look like we are getting some solid textures and models to look at as we go here but it really is just what we would expect here. Even when it comes to the 30 different weapons we will get to use, they all look about as normal as we have always seen. There is also a weird focus on the fact that the developers can alter the individual teeth of all of the characters for some reason. I am not sure why this is a big deal for S.T.A.L.K.E.R. 2, but there is a whole lot of focus on it for some reason.

S.T.A.L.K.E.R. 2 Dev Highlights video, includes a first look at updated models, new factions, and weapons with more than 30 different ones in the game.

The devs at GSC Game World have also built a custom teeth tool for their characters.

Is this exciting for the S.T.A.L.K.E.R. franchise or is it very basic for now? Do you think there will be a good reason to have all of these minute changes for the NPCs or is it just a look behind the curtain for the game? Do you think the weapons will function any differently than we expect or will they also be as basic as they look here? Let us all know down in the comments your thoughts on all of this and then discuss it. As more for S.T.A.L.K.E.R. 2 comes out, we will share it all here. Be sure to keep checking back on the site for all of that and much, much more.