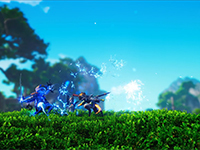 Many of us have been waiting patiently for more for Biomutant after the release announcement not too long ago, and now we are back with some actual gameplay. Some solid combat gameplay for the game that shows off how pretty it will all look and flow. It might be a little hard to figure out exactly how Experiment 101 will have it set via the controls and motions, but it is just as pretty as we should have assumed for Biomutant thus far. Given that it is a new IP coming out there, there is a lot riding on it not just looking good but something we will want to pick up many times over. With May 25th speeding up on us, it is something that might need better definition to help with those pre-orders too.

Speaking of pre-orders, it looks like there is now another big incentive to try to get us all to throw down on Biomutant two months ahead of launch here. A new Mercenary class to use in the game that will have their own perks and dual-wield that we can use from the start of the game. This is something that will be made available for everyone out there that wants to buy it for Biomutant post-launch, but is something that will come bundled in at no extra cost if you choose to pre-order. Not too shabby for placing your money upfront for the game based on what we have had thus far. Especially if we are going to make the assumption that it will be a bit more costly down the line if you want to use the class for a second playthrough later.

Just two months to go until your adventure begins! Biomutant will be out for PC, PlayStation 4, and Xbox One on May 25th, 2021. And we know, many of you have been waiting for some new gameplay footage — so here it is. Check out the new action-packed combat trailer, showcasing various aspects of Biomutant’s versatile combat system.

The Mercenary offers a unique combination of perks and is playable from the start through this DLC only. The Mercenary has dual-wield as a starting ability and is geared up with a classic Katana and the shorter Wakizashi blades to explain it in real-world terms. Simply put, it'll let you experience the world of Biomutant as classic samurai-looking warrior from the very beginning.

Who gets the Merc Class as a preorder incentive?

The Merc class will be included in all digital preorders, as well as all physical Super SKUs of Biomutant (no matter if it is a preorder or not); inside there will be a little leaflet with the access codes on it. Preorders for the physical Standard Edition will not get the Mercenary.

Will it be exclusive or is there a difference for PC and consoles in terms of digital preorder?

No, they are basically the same; the only item that will be exclusive to the console will be a PS4 theme of Biomutant.

Will I be able to buy the Merc after release?

Yes, we will offer it also as a DLC post-release; the preorder incentive gives you get a slightly better deal if you preorder (base game plus "free" merc DLC) versus buying the game on release day, and then buying the Merc Class on top of that.

Does the combat in Biomutant look like it is going to be a simple action flow we have in other titles of the same type or could it be vastly more complex than the videos show? Do you like the look of this new class we have teased here or will you need to see it in action before you get overly hyped up? Will this be what makes you pre-order the game or will you be looking to add it in later if you enjoy the core gameplay the first time through? Let us all know down in the comments and then feel free to discuss it all as you so wish. If we have anything more to share for Biomutant, you know it will be on the site for you. Just keep your eyes open for all of that and much more.