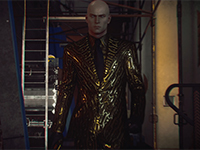 If you did not think that Hitman 3 was already filled with enough of the deadly sins from Christian Mythology, here we go with a whole new way to experience them all. This would all be part of the next big paid-expansion that IO Interactive has been cooking up for us and will all kick off on March 30th. Each sin will be its own little expansion for Hitman 3 and have us revisit some of the past locations with new escalations and gear for Agent 47 to use and survive. So, this is more the kick-off of a multi-release expansion for the game if you want to pick and choose which parts you want or go for the big Season of Sin bundle.

To kick things off here, we are starting with the Greed sin for Hitman 3 and then progressing further down the circles as April carries forward. This will bring us a new Escalation called The Greed Enumeration, which allows you to carry certain items over between each of the three stages. Along with that an unlockable Rapacious Suit and two sin-themed items; the Greedy Little Coin and The Devil’s Cane. You can see some of that in action here as we get ready to head back to Hitman's Dubai, where coins are overflowing and new gameplay mechanics will tempt your own personal greed. I am not sure what that all means, but we do not have a long wait until we know for certain.

Hitman 3: Seven Deadly Sins will be released over time through seven unique content packs. Each of the seven packs are focused on a different sin and includes a visually distinct contract, sin-themed unlockable suit, and at least one sin-themed item that can be used across the World of Assassination. Some items may also have unique properties to remind you of the sin they are inspired by…

The first content pack will be available on 30 March and will invite players back to Dubai, where coins are overflowing and new gameplay mechanics will tempt your own personal greed.

The Seven Deadly Sins Announcement Trailer gives you an early look at what to expect from Act 1: Greed later this month.

The focus of Act 1: Greed is a new Escalation called The Greed Enumeration, which allows you to carry certain items over between each of the three stages. Feeling greedy? Prove it!

As well as the new Escalation, Act 1: Greed will also include the unlockable Rapacious Suit and two sin-themed items; the Greedy Little Coin and The Devil’s Cane.

Plus, new seasonal events, such as the Berlin Egg Hunt, will also be available for all owners as well as the return of much-loved seasonal events from Hitman 1 and Hitman 2.

To support our Seven Deadly Sins expansion, we’re now releasing our regular content as part of a Season of Sin, instead of a monthly roadmap. This is mostly a change in name, because the Escalations, Featured Contracts and Elusive Targets are still coming thick and fast – and free!

So, instead of the April Roadmap, we’re excited to kick-off the Season of Greed in Hitman 3, which starts the release of new content, both paid (see above) and free for existing owners. A Season of Sin can last anywhere between 4-6 weeks and include Escalations, Featured Contracts, and Elusive Targets. The content will be closely tied to the theme of the sin for that season.

Did you expect to see this hit our favorite murder-simulator or will it all feel a bit off for a Hitman game? Do you think it will only stick to the looks of it all or will there be something more sinister going on in the DLC story of it all? Do you think these will all be spaced out over the weeks or will it have a long gap between each big update we have for it all? Let us all know down in the comments and then feel free to discuss it all as you wish. If there is more for Hitman 3 or the IP in general, we will share it here for everyone. Please keep checking back in for all of that and everything else out there.