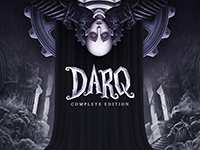 We sit down and review DARQ: Complete Edition. A next-gen upgrade for a dark puzzle game. Here is our review of the DARQ upgrade

DARQ made a bit of a splash back in 2019 when it first brought its unique look and puzzle gameplay onto the scene. It also flew under the radars of quite a few gamers out there when Unfold Games offered it all up. It happens sometimes and we are all guilty of missing out on titles. That is why I am glad to be back with the DARQ: Complete Edition now that Feardemic wanted to make sure that it was brought to the PS5, Xbox Series X, and Switch again. With all of the capabilities of the systems and then the DLC that came out after the game originally launched. Now we are here to let you know if you missed out on a gem or if it is something that might stay in the cult classic realm of things. Here is our review of this new version of the game.

Here we go jumping into the mind of Lloyd. He is a bit of an odd boy that also seems to have figured out how to lucid dream. A good thing too as it looks like everything has gone off the deep end and turned into nightmares. Not only that, but it seems like Lloyd also cannot seem to truly wake up. Now we have to set out to help him while bending the physics of the dream world in some interesting ways. Will that finally be something that will wake Lloyd from all of these nightmares… I am not a fan of starting off in this kind of way, but I do have to toss out there that the controls for DARQ are one of the rougher points to have to work with in the game here. Not that they are overly complex as the game is a side-scroller more or less and you only use three different controller buttons. It is just that they do not always trigger or will deactivate without any prompting from the user. Not a huge deal if it was not for the fact that the same movement controls for Lloyd are the same that control the elements. Generally, it never came down to an issue where I was not able to progress, but when some of the puzzles require some timing to move items around, it can make things more frustrating than needed. Just get ready to need to repeat some of these puzzles in DARQ a few times still due to accidentally moving away from the triggers or not at all during some timed sections.

Other than that, I found that even with all of the DLC in the DARQ: Complete Edition the overall gameplay was insanely short. Most of which based more on the time it takes to figure out what you need to do for the puzzles. Given that some of the more complex puzzles can be beaten with brute force or are modified versions of puzzles that have been out there for decades, it can lead to getting through it all insanely fast. Even with the above issue, I do not think it took more than two hours to get through the core and DLC that come bundled together. Not a terrible thing, but given how fun some of them were and the atmosphere created, it felt like we were still given such a small amount of time in DARQ again. Something that could have been mitigated if the puzzles changed up a bit and gave some extra kind of replay to it all. While they do not feel quite as challenging on the second pass of it all in DARQ, I do have to say that most of the puzzles in the game were still fun to play and experience. Some of them being a bit cleverer than expected when they had a standard one to lead into it. They generally have that perfect level of balance where they are not too difficult but still give you that sense of accomplishment and figuring out how to bend the world to do it all. Something that also felt like it ran a bit smoother in this version of DARQ to help focus on everything else going on out there. even when it came to puzzles that required stacking things in a certain order along the way or finding how to link items together, it never truly felt rote. I only wish that we had more of them to experience along the way of it all.

To those ends, I do want to mention that the levels and environment designs of DARQ were not only that true level of creepy along the way, but felt like they were always well-planned out. Never did it feel like something was there or in the way just because. Even when the world makes the transitions to allow us to go down different paths, things make sense as to why we are blocked off or cannot flip the screen again. The force of the spin places a trash bin in our way or moves it out of the way. We cannot make it to a flat surface to walk up the wall. All of these things just seemed to fit in DARQ and I never felt like questioning it or brushing it off as "video game" logic when it easily could have been. A living dream world is one of the easier ways to get away with that and it never felt like they took that path to me.

When all is said and done, even the DARQ: Complete Edition feels like it is a bit on the short side of things. Not a terrible thing, but something worth noting before diving into it all. The puzzles are fun, the world is creepy, and most of the controller issues can be worked around. If you are looking for a short deviation from the various other AAA titles out there, this is a great break to take. Just do not expect to play it beyond the one time as the puzzles and item locations are always the same to solve and thus there is little replay besides showing someone else the game. I enjoyed my time with it all, and I know others will, but this is something that you need to weigh as even the DLC added in does not expand the title out too much further.

DARQ: Complete Edition was developed by Unfold Games and published by Feardemic for the PS5, Xbox Series X, and Switch on March 25th, 2021. A PS5 copy of the game was provided by the publisher for reviewing purposes.