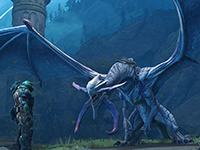 We have waited and now we are heading to the next big release for DOOM Eternal as of March 18th. That would be tomorrow for those reading this live and it will be a short wait to be able to see how id Software is going to wrap up this little saga we have been ripping our way through so far. This could also be the end of it all for the DOOM Slayer as he aims to take down Hell for the last time. I have a feeling this could be the end of it for this version of the game and until we get the next full release, but this is the final DLC that we will get to enjoy in this iteration. No matter the case, I am excited.

It has been a rather epic tale for us to go through in DOOM Eternal and I am interested to see how it is going to end and if it is truly going to end. We have new worlds to go to and other challenges to go through with this new DLC. Challenges in the way of a new Armored Baron, the stalwart Stone Imp, the venomous Cursed Prowler, and the new Screecher zombie who empowers nearby demons when killed. We are going to need to keep running and gunning as best we can to survive it all. Have a look at the latest gameplay trailer we have for DOOM Eternal and get ready for this really short wait to get back into it all.

The epic conclusion to the DOOM Slayer’s Saga and the second campaign expansion to the critically acclaimed DOOM Eternal, arrives tomorrow, March 18 on PC, Xbox One, PlayStation 4, and Stadia. Witness the end of the Slayer’s journey that began in DOOM (2016) as his crusade against Hell reaches a conclusion of incredible scale and consequence.

You denied the gods and awoke an ancient evil. Now rally the scattered Sentinel armies, lay siege to the last bastion of Hell, break through the fortress walls, and face the Dark Lord himself. The soul of the universe hangs in the balance.

Face Hell’s armies in never-before-seen locations. From the ruins of ancient Sentinel settlements and the cosmic wonders of the World Spear, to a devastated and overgrown city on Earth hiding a mysterious gateway, to the last bastion of the Dark Lord protected by towering walls and powered by advanced technology.

Prepare to fight deadly new variations of demons, including the powerful new Armored Baron, the stalwart Stone Imp, the venomous Cursed Prowler, and the new Screecher zombie who empowers nearby demons when killed.

Are you fully prepared for the ripping and tearing in DOOM here in this DLC? Do you think this will end the story of it all or will it just be for this little segment of it all until we get the next big release? How hard do you think these new enemies will be and will there be some easier ways to handle them all? Let us all know down in the comments and then feel free to discuss it all too. If we have more to share for DOOM Eternal or the IP in general, it will all be here. Keep checking back for all of that and much more that we will have out there.