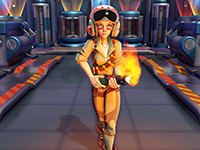 A new trailer for Evil Genius 2: World Domination is here to give us a fun view of the game and get us ready to use the Photo Mode coming to Evil Genius 2 at launch

Every day that we get closer to the March 30th release for Evil Genius 2: World Domination I know I am getting just a little more excited. Once again here we are with a new look at the game with Rebellion going a little more cinematic than we have seen in the past but all for a good reason. A reason beyond just trying to keep promoting Evil Genius 2 but to show off more of the characters, lairs, traps, and features coming to the game. One of them allowing us to do close to the same with the showing of Photo Mode for the game to help us take advantage of all of the fun stuff we have out there to play with. Something that seems to be perfect for a game as this one is here.

This is listed as one of the more cinematic trailers for Evil Genius 2, but it does feel like there is more footage from the gameplay here than anything truly pre-rendered or generated with the game's assets. You can see where the disconnect is in there, but some of it I like to think of the developers being able to use the engine and Photo Mode angles we will be able to take to a better effect. Something we will certainly get a whole lot of practice with as we wait for all of the post-game packs that will be coming for Evil Genius 2 where some of this feels like it is coming from. Especially when we can spy a few new henchmen, minion types, room types, traps, and items mixed in. You do need to be a little more eagle-eyed to catch all of that, so get ready.

Whether you’re new to the series or a returning tyrant, the Cinematic Trailer is a fantastic glimpse into the nefarious world of Evil Genius 2. It goes into every aspect of the game’s management strategy gameplay — think of it as a World Domination 101 — from lair-building to training your minions, and from recruiting crime lords to stealing priceless artifacts. It’s everything you’ll need to help you take over the world in just two weeks’ time.

The Cinematic Trailer showcases just a mere hype-building taste of the brand new villainy you can inflict on your victims in Evil Genius 2. From the four Evil Geniuses you can play as, each with their own unique narrative campaigns, to all the many new minion types, rooms, devices, traps, henchmen, agents, super agents, and Doomsday Devices, Evil Genius 2 gives you the choice to be whatever kind of diabolical mastermind you want to be.

Photo Mode is coming to Evil Genius 2 — and it will be available at launch FREE. Shoot your minions — no, not like that — and the rest of your island lair in all its wicked resplendence.

In Photo Mode you can adjust camera options like field of view, depth of field, and focal distance, toggle the visibility of different characters, and apply a range of filters, overlays, and more. Just make sure your snapshots don’t fall into the hands of the Forces of Justice.

The treachery won’t stop with the release of Evil Genius 2. As revealed previously, there will be a season of new content coming to the game in the weeks and months after launch, and that includes both paid and free content.

While the dev team is strictly focusing on launch right now, Rebellion can reveal a new campaign pack is planned for post-launch, featuring a new playable Genius, island lair, and Force of Justice. Across other packs we’ll also introduce new henchmen, minion types, room types, traps, items, and more. We’ll go into all of these in more detail shortly after launch, including the timings of various releases – so please stay tuned.

What do you think about all of the new footage we have here for Evil Genius 2 and does it seem like there is more cinematics than expected? Will you be trying to use the Photo Mode as much as possible or will it be a feature that you might skip for a bit? What new things do you think will come with the expansion packs and did we see new henchmen in the mix here? Let us have all of those thoughts and feelings down in the comments and then feel free to discuss it all as you wish. If we have more to share for Evil Genius 2: World Domination, you know it will be here for you to enjoy. Just be sure to check back in.