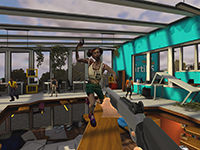 A new Zombieland video game is on the way with the announcement of Zombieland VR: Headshot Fever for the various headsets out there

The VR titles seem to keep rolling out there and the next one we have to see here looks like it will bring us back into the comedy and horror, as it is Zombieland VR: Headshot Fever. Yes, another title from the IP here and this one is coming from XR Games. As the title suggests, it will be a version of the Zombieland experience all in VR. We are talking the films and not the one-episode TV show that can be found out there too. All so we can get ourselves into the boots of Tallahassee, Wichita, Columbus, and Little Rock to try to get the Zombie Kill Of The Week.

Before you get overly excited to see some next-gen visuals and gameplay for this Zombieland title, I will warn you that is not the case. That is not to say that it might not be an amazing time and experience, as graphics do not make a great game, but it is something that could be a little off-putting for fans and VR gamers in general. Zombieland VR: Headshot Fever does look like it will offer up what the title says with zombies and headshots everywhere. In fact, the gameplay encourages it by giving bonuses and time dilation by successfully scoring multiple in a row. All while gathering up power-ups, weapons, and other items to climb the ranks of it all. I do wish there was a better way to do some creative kills but that might be a little harder to do in this kind of setting. I guess we will see when it hits the Oculus, Vive, PSVR, and others when it launches.

Survive ferocious zombies and enjoy the dystopian humor of Zombieland as Tallahassee, Wichita, Columbus, and Little Rock train you to run the fastest, most dangerous zombie-killing racecourse ever devised — the Zombieland Invitational!

Do you think this might have missed the mark of the Zombieland craze or will it bring new life to it all once again? Do you think it would have been a better choice to go with something other than just headshots here or is that a limitation of the hardware and technology from making it something that fits perfectly in the universe? Does this look like something that will be stationary or on-rails, or will it be something that gives us some freedom of movement? Let us all know down in the comments and then feel free to discuss it all as you wish. If there is more for Zombieland VR: Headshot Fever, we will share it all here. Keep coming back for all of that and everything else we might have.