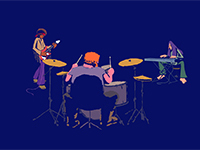 It is always fun to see when we have new IPs coming out from small teams and here we go with the latest titled A Musical Story. A new rhythm title that is coming out of Glee-Cheese Studio for the Switch, Xbox One, PC, and iOS platforms. That is the current list but I have a feeling that could expand over time. No matter the case, A Musical Story is coming and it looks like it is going to try to tell an interesting story with nothing more than the music and visuals for us to experience. You can read that as there will be no dialog or text for us to experience with it all, as you will be able to see in the trailer below.

There is a little bit of the actual gameplay here for A Musical Story but it is a little hard to determine how it all goes. It sounds like it will be basic button presses to the beat and audio of the game. All of which seems to be inspired by Pink Floyd, Led Zeppelin, and Air and nothing that looks to be licensed out there. Most likely the better choice for A Musical Story given the size of the studio and the fact that they are more open to doing everything they want along the lines of the story too. I know I am excited to see how this all goes and will be looking to give the demo a try to see how the first ten chapters will go.

Indie publisher Digerati and developer Glee-Cheese Studio are delighted to announce A Musical Story for PC, Nintendo Switch, Xbox One, and iOS. The game is scheduled to launch this summer. A music/narrative experience set in the 1970s, A Musical Story is part rhythm game, part interactive art, and uses the connection between music and memory as a central theme. There’s no text or dialogue — the entire story is told through the game's original music (influenced by bands such as Pink Floyd, Led Zeppelin, and Air) and distinct animated art style.

A Musical Story has been picked for the London Games Festival Official Selection, and will be showcased as part of the 10-day online event, starting March 19. A free demo that gives players the chance to sample A Musical Story's first 10 chapters will be available from March 19, to coincide with the start of the London Games Festival. The demo will be available to download from the game's Steam page.

Starting work on the project in 2017, the four-man team at French developer Glee-Cheese Studio experimented with many different prototypes, each one exploring various story concepts, and musical and visual styles, before settling on a final vision for A Musical Story they felt would set it apart from other music/rhythm games.

About A Musical Story

A Musical Story is a rhythm game set against a 70s backdrop. Explore the memories of Gabriel, a young man trying to come to terms with his situation through the connections to his musical memory. Each correctly played melody opens a new chapter into Gabriel’s past, bringing him closer to the truth.

How are you feeling about A Musical Story based on what we know and can see here? Do you think we will be able to better tell the story of it all based on this or will there need to be some kind of breakdown given some of the limitations? Can you hear all of the influences out there and do you agree it was a better option to go with their own unique music instead? Let us all know down in the comments and then feel free to discuss it all as you wish. If there is more for A Musical Story, we will aim to share it on the site for you. Keep coming back for all of that and much more out there.