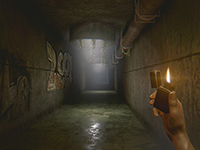 It is always interesting to see when video games are getting remade for a newer audience and this is the case here for the game In Rays Of The Light that is heading to the PS4, PS5, Xbox One, and Switch on March 17th. It may not have been a massive title from before, but it looks like Sometimes You wanted to make sure more gamers had a chance to experience The Light than did before. Not only that, but also to give everyone a chance to experience the game possibly as it was meant to be before. I say that as it looks like we will have a few new updates and changes mixed into it all here to further dive into the weirdness of it all.

I have never had the pleasure of playing the original title, but was a huge fan of how the team brought 7th Sector to life and have a feeling the same care will be there for The Light. Especially when you see that they are giving us two endings to the story and a bit more to go on than we could have had before. All while we move about the world of In Rays Of The Light to solve logic puzzles and try not to get lost in the oddness of the world out there in general. Have a look at the latest trailer for the game and see if it is going to capture you as it has us a bit here. I am curious on how some of this will all play out at the end of it all.

In Rays Of The Light — Release Trailer

A new game from the developer of 7th Sector, Sergey Noskov.

There is only you, the abandoned remains of a former life and the flourishing nature that feels great in the absence of man. This world is both gloomy and empty, but so incredibly beautiful.

In Rays Of The Light is an atmospheric author’s parable about our place in this world, life and death. Explore a mysterious territory filled with a variety of details that reveal the story. Solve logic puzzles and study text messages along the way.

After seeing all of this, are you interested in seeing where the rabbit holes go from The Light? Do you think we will see everything expanded much further than we could have thought or will it just be some of the ending stuff we get updated? How well do you think it is going to run on the other generation systems when compared to the only next-gen system we have here? Let us all know down in the comments and then feel free to discuss it all as you wish. If there is more for In Rays Of The Light, we will share it on the site for you. Be sure to keep checking back for all of that and much more.