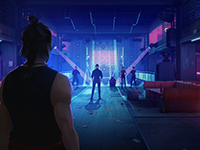 An announcement for a new Third-Person Action Game, Sifu, came out of the State Of Play and we have some solid gameplay to look at for Sifu

Here we go diving into another Kung Fu title, but it looks like this one is coming from a team that has some experience in the realm. The game is called Sifu and it was shown to the world during the last State of Play event that was held to give us a look at this PS4, PS5, and PC title. A title that is coming from developer Sloclap. You might remember them as the team that recently brought us Absolver that was in a similar style to this one. The big difference here is that it looks like Sifu will dive further into the Kung Fu style and solo play of it all as we beat down goons in various locations that look to be lifted from the films and shows over the years.

The announcement for Sifu does not go into how we will be pulling off these amazing hallway fights in the fictional Chinese city here, but it gives that solid feeling of how well it will flow. Given that our protagonist here that we will be controlling is out to defend the family legacy, this is going to need to be something we master. All while pulling off some sweet moves, mixing in some weapons, and using the world of Sifu to our advantage to make sure we survive and then enemies do not get back up. Have a look at the announcement that we did get for the game just a bit lower and see if it will bring you closer to these scenes we all have fantasized over playing out for years now.

Independent development studio Sloclap revealed its next title today during the Sony PlayStation State of Play showcase — Sifu. The followup to 2017’s ambitious hit multiplayer game Absolver, Sifu is an artful and true-to-combat Kung Fu game exploring themes of revenge and redemption launching this fall on the Epic Games Store, PS4 and PS5.

Featuring the gripping intensity of classic Kung Fu films with realistic and raw combat, Sifu tells the story of a young Kung Fu student who has spent their life training for a day of reckoning after the brutal murder of their entire family by a mysterious assassination squad. Hunt down the murderers one by one as you explore gang-ridden suburbs, hidden corners deep within the city, all the way to the cold hallways of corporate towers. Adaptation and careful positioning are the key to your survival and you must use everything at your disposal to succeed in your life’s mission.

Sifu’s unique gameplay sits in the crossroads of two established and popular genres, mashing the intensity and timeless thrill of beat em ups with the gripping design of 3D character action games. Set against a detailed backdrop of a fictional Chinese city, you will uncover an ancient mystery via a series of difficult confrontations that will test your skills to their limit. To overcome the odds that are heavily stacked against you, you’ll need to rely on your mastery of Kung Fu, and on a magical pendant that will revive you after death. The cost of magic is dear, however, and you will age significantly every time you come back to life: time is the price you will pay for your revenge.

Kung Fu is a path for the body and the mind. Learn from your errors, unlock unique skills, and find the strength within yourself to master the devastating techniques of Pak-Mei Kung-Fu. Your family’s legacy depends on it.

Are you shocked to see a game like Sifu get the announcement here or does it fall in line for the developer to offer up to us all? Do you think it will stay a solo fight or will there be some kind of multiplayer mixed in as development wraps up? Are you excited to see that we can get those great action scenes to play out in our hands now and not be forced to watch others do them on the big and small screens? Give us all of that feedback and then discuss it all below. As we learn more for Sifu, we will share that knowledge with you too. Be sure to keep checking in for all of that and much more as we march forward into the future.