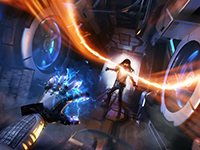 The Persistence was a survival-horror title that launches last year for almost every platform under the big ball of gas we call the Sun. It hit, did its thing, and then was lost in the shuffle of the PS5 and Xbox Series X releasing. It was a weird time to release games last year with everything and it looks like Firesprite Games is looking to remedy a few things out there with the announcement of The Persistence Enhanced. A new version of the game that will be hitting the next-gen consoles and PC to offer us all what we would want in a next-gen title out there. Even though it did launch on PC before, but we will ignore that for now.

As with all of these kinds of updates and upgrades, this version of The Persistence will offer up new lighting, textures, UX Enhancements, and Raytracing for those looking to have a higher-end experience when it comes to graphics. For those on the PS5, it does look like they will be taking advantage of the DualSense controller features on the console to add in some extra feedback and immersion, but there is nothing truly defined on what that will be yet. My guess is that it will be the same and a few other tweaks that will help The Persistence when it comes to the various VR items too. Spring of this year is coming up, so we should know more in the next month or two for when this does hit.

Continuing their successful partnership, Publisher Perp Digital and independent games developer Firesprite are pleased to announce that the acclaimed survival-horror title, The Persistence Enhanced is coming to PlayStation 5 and Xbox Series X|S in late Spring 2021 with a physical retail release targeting late Spring 2021.

The Persistence offers a brutal take on survival-horror that integrates an innovative rogue-lite design into the genre as players are tasked with surviving aboard a doomed deep space colony starship in the year 2521. Overrun with an array of horrific and murderous aberrations, players must explore, evade and fight through the depths to bring the ship back to Earth.

The Persistence Enhanced dials the atmosphere and tension up further with lighting & UX Enhancements and Raytracing. Immersive haptic feedback is also supported with the DualSense controller on PlayStation 5.

Did you expect to see this kind of upgrade for The Persistence or did you think it was going to be a ways off before we did? Do you think there will be more to the visuals than what we have listed here or will it mostly be just to use the new hardware after it launched? How do you think this will shift for the VR aspect of things here? Let us have all of that feedback down in the comments and then feel free to discuss it all as you wish. If there is more to share for The Persistence Enhanced, you know we will have it here. Be sure to keep checking the site for all of that and much more. We will share everything that we can find out there.