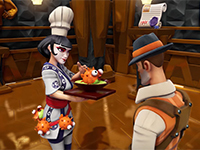 The PC specs for Evil Genius 2: World Domination are here now and you can check to see if Evil Genius 2 will run well for you

If you had any concerns on if you would be able to run Evil Genius 2: World Domination on your PC when it launches on March 30th, you can now see if those worries are justified or not. I am going to venture that they will not be issues for those out there that have a gaming PC in general. Rebellion just wanted to make sure that you knew where you would be running Evil Genius 2 here in the coming weeks. For those out there that have been keeping an eye on the game since the last title, maybe you will want to look into doing a slight upgrade to get to the recommended settings for it all. Either way, we have some new footage to look at here.

It is a little interesting that they felt like they also needed to drop in the specs for the original Evil Genius in there that most systems should be able to handle with some ease currently. Not to mention that the basic nature of this game should not require anything that would normally be breaking the bank or go to a scalper to be able to pick up the hardware. Even if you wanted to run Evil Genius 2 at its peak, I do not think anything like that would be needed. That is why I will just focus more on the specific scenes and areas being built here in the lair and use to help my own plan as we get closer to launch.

Evil Genius 2: World Domination — Will It Make Your PC Self Destruct?

With the minimum and recommended requirements for Evil Genius 2 recently revealed, you can now see exactly whether it’ll zip along on your gaming rig, or initiate the self-destruct sequence on your ancient beige box from the early 90s. In this video, we’ll take a look at the PC hardware you’ll need to seamlessly enslave the world and twist it into the contours of your sick vision when the game lands on Steam this March 30th.

Did you have any worries that the specs for Evil Genius 2 were going to be off the charts? Does this all line up with what you were expecting or will you need to make a few updates to be able to run the game as recommended? Why do you think we needed the original game's specs here given the time that has passed since that one came out? Give us all of that feedback and more down in the comments and then feel free to discuss it all there. If we do come across more for Evil Genius 2: World Domination, we will share it all with you here. Be sure to keep checking in for all of that and much, much more.